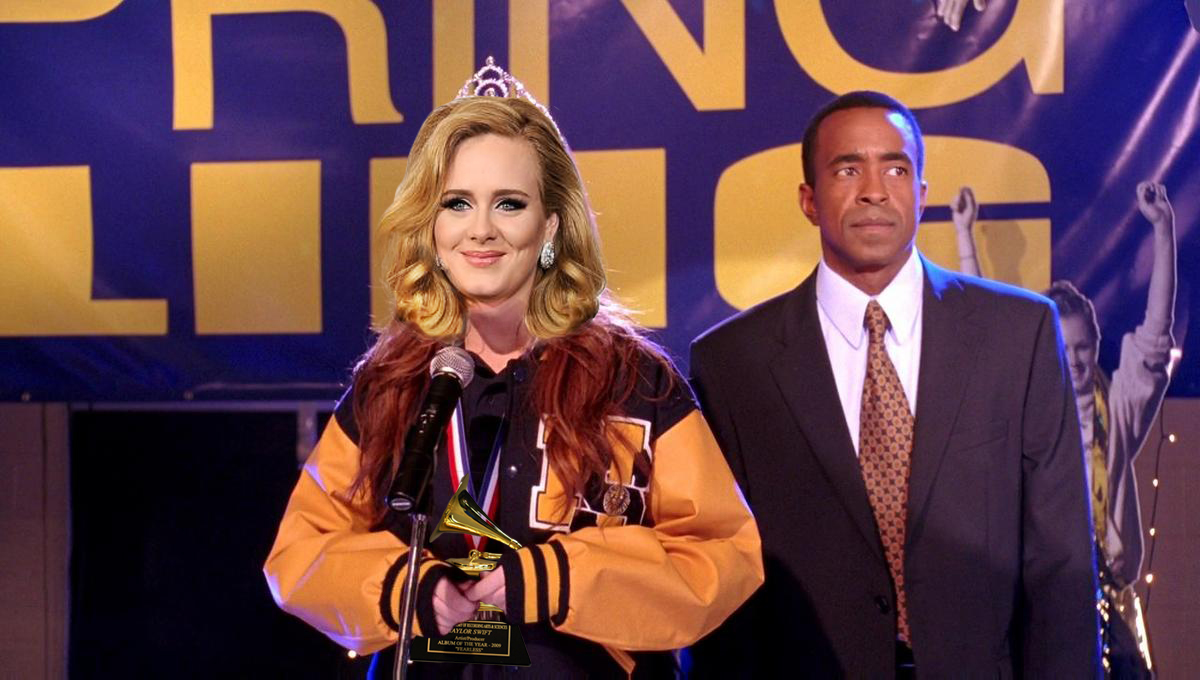 Before the Grammys even happened on Sunday, most people had done the math and realized the main storyline would be Beyonc vs. Adele. They were both up for all the big awards, and theyre obviously both huge fucking stars and queens and magical unicorn women.

Both of their performances ended up as some of the most talked about, but for different reasons. While singing a tribute to George Michael, Adele had to stop the song and start over because she was out of tune. She said “fuck,” which we kind of love, but also like, get your shit together. You had one job. Whatever. Beyonc, on the other hand, made news because she literally looked like some kind of pregnant alien goddess while performing a medley of songs from causing viewers everywhere to wonder for the umpteenth time whether she is, in fact, human.

Both of them won smaller awards in individual genre categories, so neither was going home empty-handed, but Beyonc came up short at the end of the show when Adele won Album of the Year. Knowing the Beyhive would annihilate her if she did literally anything else but dedicate the award to Beyonc, she used both acceptance speeches to talk about how amazing Bey is. Adele was crying. Bey was crying. We werent crying, you were crying!

Years from now, there will be a few moments that will stand out in historymoments you’ll always remember precisely where you were and what you were doing when they happened. When Michael Jackson died. When Barack Obama won the presidential election. When Beyonc released

Not content to shock us all with a surprise album, Beyonc came out of the woodwork and did what no one other artist has ever accomplished: an hour-long visual experience that celebrated and empowered black women, forcing us to acknowledge for the first time that Beyonc is, in fact, a black woman.

In addition to offering racial commentary and opening up about her struggles following Jay Z’s (reported) infidelity, Beyonc used to pose important questions to the world: What’s worse, being jealous or crazy? Who is Becky with the good hair?

In a situation where most would have shut down and shied away from the public, Beyonc aired it all out for the world to see. It was healing, rather than vindictive. She did it all while bringing black culture to the forefront of pop culture, exposing it to people who would have otherwise pretended it didn’t exist, only to try to take credit for it a few years down the line. She did all that, and then gave us an hour of startlingly beautiful visualsand many Halloween costume ideason top of it.

The irony of Beyonc losing to a white woman was not lost on anyone in the audience last night. After last years #OscarsSoWhitefiasco and the current racial climate in general, you would hope that the Grammys could have been one of the first award shows to get their shit together and serve as an example for the rest of the industry of what a truly unbiased event could be. But once again, a woman of color was shoved into the background when she deserved to shine. And when that woman is Beyonc, we will not take that lying down. Nobody puts Bey in a corner, not even the Grammys.

In a moment that easily could have made or broken her career, Adele used her acceptance speech to go full Cady Heron and essentially give her spring fling crown Grammy to Beyonc.

You know what they say: when life hands you lemons, make and then watch as it gets absolutely snubbed by the Recording Academy. Our thoughts about the entire debacle can be summed up, once again, by Adele.

To Beyonc, to Adele, and to all the strong women in the music industry and life in general who put up with more shit than they should ever have to: