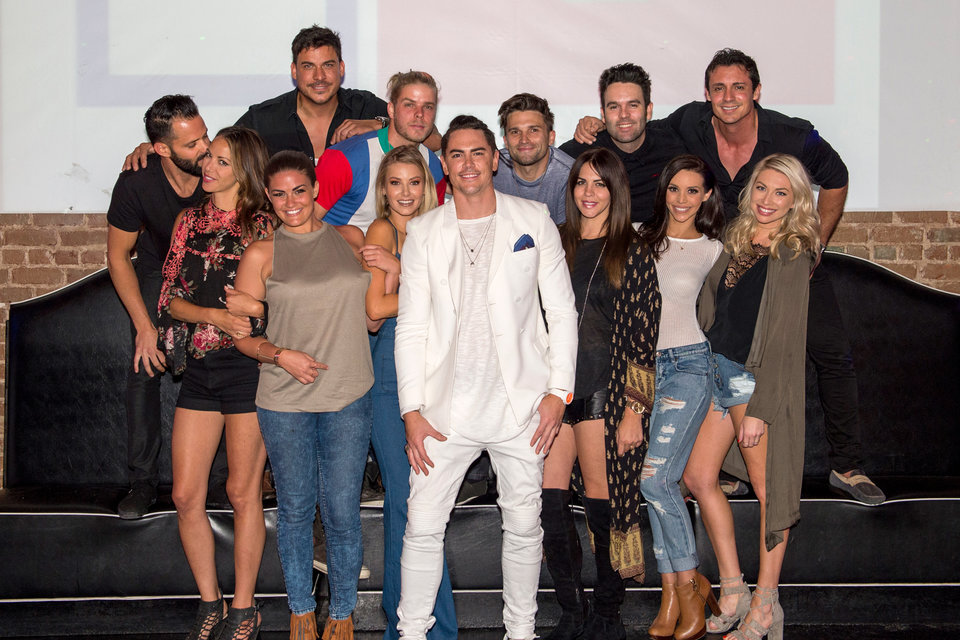 Last weeks episode left off where they all leave off: Katie and Stassi talking shit about Lala and her maybe-married boyfriend. Except I guess they just abandoned that fight in the middle because we didnt return to it this episode. Ok. That’s a choice.

Brittany asked Jax for a vodka and soda. Damn it, Brittany, just when I thought you could sit with us!

Scheana is pissed because shes splitting the bridal shower cost with Stassi and Kristen and they dont even let her make any decisions. Is that a rule of being a bridesmaid? You all have to pay for the bridal shower? If so, let the record reflect that I’m out.

OK so his birthday is a fundraiser for kids in Haiti, guess I cant really make fun of that. Welp.

Sandoval is braiding his hair for his birthday like he’s on a family vacation in the Dominican Republic.

Jax is having a roast that Kristen is hosting. Seems like a time bomb waiting to happen; I cant wait.

Sandoval invited Kristen and Stassi to his birthday party. Wow, the tables have fucking turned.

Arianas like the more people come, the more money we get but internally shes like god damn it Tom, did you have to?

Katies back at the paint store because she doesnt know what dirty pink is. To me this seems clear: dusty rose. And again I wonder if they have never heard of Google. For the record I did Google “dirty pink” and this is what I got:

IDK some solid options I think.

Katie is legit so mad that Toms accusing her of being too drunk that shes about to rip one of those wheel things of paint swatches in two. Is Katie secretly the Hulk? I mean it makes sense, nobody likes her when she’s angry…

Schwartz calls Katie a bitch so she drives away and is like you can call an Uber. I support this. I would not chauffeur someone who just called me a bitch.

Sandoval out here at his birthday party looking like idk I cant think of a simile rn. But hes got some random braids and is wearing an all-white suit so it bears mentioning, because he looks ridiculous.

Schwartz: Me calling Katie and bitch and her storming out is just casual Thursdays.

^Reason #453 they shouldnt get married.

Brittanys mom is still here and her lipstick is as metallic as ever.

Who TF is this creeper they hired to hit on everyone as they walk into the party?

Scheana to James and Racquel: Im glad you guys are still together, considering.

Scheana: Oh, you didnt know (that I’m about to not-so-subtly attempt to nuke your relationship)?

Fuck, I went to the bathroom during commercial and missed this interactionmy bad yallbut Im gathering that Scheana accused James of cheating and James denied it vehemently.

Ok so Raquel already knew about everything and is still with Jamesman, she is dumber than I thought. Scheana and Katie call her dumb as fuck, so damn, you know shes really fucking dumb.

Jax tries to give a donation and his card is declined. Typical. Brittany pays, hell ya feminism.

Brittany: Im sorry but your card got declined and mine went through. Make a sandwich.

YAS BRITTANY. Now say it to his face and not in front of an unmanned camera on a tripod.

Drunk Katie vents her relationship problems to Lisa and Lisas basically like get your shit together! Lisa is not your marriage therapist, although thats definitely a show I would watch. I mean, I guess that sort of is this show. NVM.

Scheana tells Ariana she was crying all day because shes feeling lonely because Shay isn’t around as much even though things are really good between them. Uh-huh. Sure.

Like, I feel bad that Scheana cant talk to her friends about her problems, but I have a hard time believing that the entire year leading up to her wedding wasn’t The Scheana Show. Let Katie have this, it only took like what, 4 years and 16 ultimatums for her to get to this point.

James is showing Raquel his DJing shit and shes like What do you have to do?

Raquel: OMG thats too hard for me.

I literally did not even exaggerate that a little bit. Im gonna start a Go Fund Me to send Raquel back to kindergarten, because Im not sure how shes made it this far in life. Unless her sarcasm is so advanced that I just think shes stupid?

Back at SUR, Lala is MIA. Shocker. Lisa should have just let her quit.

Scheana and Katie are talking about how Katie and Tom fight when theyre drunk and Katies like but to be fair we fight when were sober too. Well Ill believe that when I see itliterally. Can we get a playback reel on sober fights?

Scheana also tells Katie what they spent on her bridal shower. Nooooooo.

Scheana: Were spending thousands for a party thats a few hours.

Maybe not the right thing to say TO THE BRIDE. Yeah we spent a few thousand dollars for your dumb bridal shower that was only a couple of hours, I mean, can you talk about not being worth it?

Brittanys 18th birthday was G.I. Joes and Army Hoes. Damn, I had to wait until junior year of college for a G.I. Joes & Army Hoes date party, so, respect.

Jax had someone else take the ACTs for him? Damn, thats fucking rough. Those are like, the SATs for less smart people.

Even Sandoval thinks Katie has a drinking problem. Oh boy, I cant wait for this reunion.

Katie: Enough people have told me I get angry when I drink so I decided to do something about it

Probs not what they meant.

Stassi refers to the hills of Azusa, a place I have never heard of and not even sure I’m spelling correctly. OK, I will eat that slice of humble pie. Begrudgingly.

Kristen is helping Brittany write her roast for Jax. The former sidechick giving the current girlfriend roast advice, what could go wrong.

Brittany has to tell her mom about how she and Kristen maybe hooked up. Brittany is more brave than I am, I would jump in traffic before telling my mom about my lesbianic experience.

Ariana and Tom are really going for this braids angle. The couple that braids together, stays together I guess.

Kristen: Jax, Im not saying youre dumb, Im just saying that you once asked Lisa what was in a vodka tonic.

Ariana then roasts Kristen: Why are you MC-ing? At least when Jax fucked you, it was so bad that you kept your mouth shut.

Arianas like Im better at this than you, sweetie. IDK man, I think you missed the point of a roast. Mainly that it’s supposed to be funny.

Shay spoke for the first time this whole season and said hes not the fattest person in the group anymore because of Jax. Go Shay! And now he will go back to the hole he presumably lives in and not emerge until next season. Bye.

Just gonna type some highlights from Stassi’s roast of Jax:

I know this wasn’t technically a competition but the clear winner here is: Lisa Vanderpump.

Schwartz brings up the rumored gay hookups and Jax says I just wish I could defend myself because the gay rumors just arent true aka yeah Ill admit to fucking every woman under the sun and being a serial cheater and a thief but gay rumors are where I draw the line aka no homo.

Kristen got mad at Tom for bringing up the rumor and Toms like its a roast, man. Alls fair in love and roast.

Jax confronts Brittanys mom afterwards and Brittanys mom is like The homosexual was the most offensive to me. And on the third day God created the Remington bolt-action rifle so that Man could fight the dinosaurs. And the homosexuals.

You can take the woman out of Kentucky

Jax: I mean I know shes a conservative Christian, but out of all the cheating and stealing the most offensive thing is that I might have kissed a guy?

The GOP platform summed up in a nutshell. By Jax Taylor. What a fucking world.