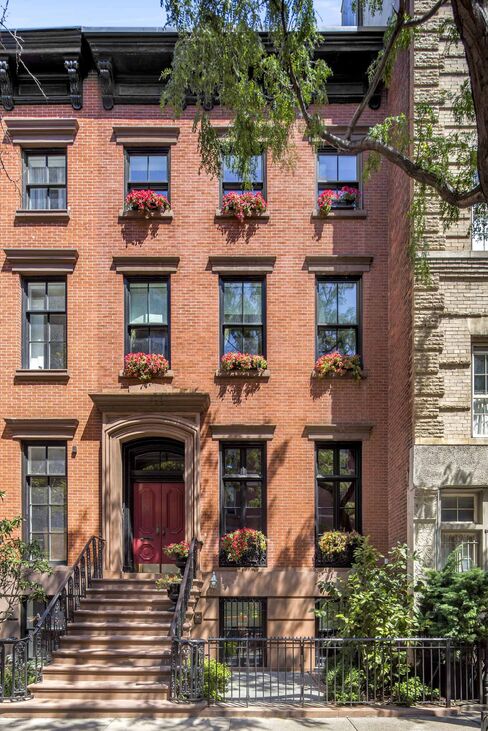 Angel “Vlady” Oliveros had always wanted a townhouse. He’d been looking with his husband Paul Camp, the chief financial officer of Circle Internet Financial, for years, and “by the end of it, I was just so tired,” said Oliveros, who is an artist. The day before they were set to leave on a vacation to South America, Camp called Oliveros to tell him he’d found the perfect place. It was a historic brick townhouse on a quiet block in West Village, a short walk from the pulsing Meatpacking district. “I was like: ‘No,'” Oliveros recalled. “‘I’m not going.'”

Camp persisted, though. The next day, with the couple’s luggage sitting outside the 21 foot-wide building, they signed an offer letter on the house. They closed in 2012 for what StreetEasy says was $5.5 million.

Just four years later, they’ve put the house on the market for $16.75 million. While a sale at that price would represent a 205 percent increase, consider, Oliveros said, that the house had to be gut-renovated before they moved in. “Every floor had an apartment on it, and on the garden level there was an office with a horrible fake fireplace,” he said. “There was all of this ugly woodwork, little windows in the back, and the extension was awful. But I saw the potential.” Particularly promising was a one-story extension in the back of the house that stretched over most of the house’s rear-lawn; it was an extension of the home’s square footage that did nothing to change its original 1855 aesthetic. In effect, their garden was the kitchen – full of light and utility. Just behind is a leafy nook providing a lovely viewwith usable outdoor space above.

He hired Zakrzewski + Hyde, a New York-based architectural firm, and embarked on a two-and-a-half-year-long renovation. “Everything is new except the walls,” he noted.

The house measures around 4,500 square feet, with three bedrooms and four full baths. The top two floors are devoted to bedrooms and a den (the master bedroom suite takes up the whole third floor), while the bottom two floors are primarily given over to entertaining spaces: The parlor floor is one large living room, which Oliveros filled with mirrors and period accents; the stair and banisters, he noted, were from the original interior of the Plaza Hotel.

It’s the garden floor, though, that gives the house a notable flair. Oliveros is unsure when the spacious garden extension was built originally, but one thing is certain: “The Landmarks Commission would never allow this now,” he said. “We were grandfathered in.” Because the extension is just one floor, the architects were able to install skylights with walkable glass, filling the extensionnow a kitchen and dining room with natural light. Oliveros turned the floor above, which is accessible from the parlor level, into a giant outdoor terrace.

The couple is selling, Oliveros said, because they want to move back to San Francisco, where they originally met. Still, Oliveros isn’t in a particular rush to sell. “We have the time, and we’re not in any particular rush,” he said. “It can happen now or next year, or whenever.”