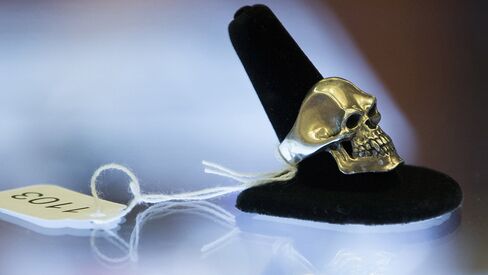 Four pairs of used, yellowing sneakers with strained laces, scuffed at the toes and lined with sweat, sit in the Boston Convention & Exhibition Center, carefully arranged by the U.S. Marshals Service ahead of a highly anticipated asset-forfeiture auction. The aging Asics were recovered in 2011 from the Santa Monica hideout of the notorious mobster James Whitey Bulger and his girlfriend, Catherine Greig.

Bidding on the sneakers starts at $20. Although they are intrinsically worthless, theyre expected to bring well into the hundreds.

They are one out of an estimated 135 lots, made up largely of household items belonging to the two, and they line the back wall, pinned between jewelry and rows of books. On the second floor of the convention center, two security Labradors lick their paws, exhausted from a morning of sniffing around a conference room filled with Christmas decorations, jewelry cases, and racks of crumbled clothing.

With the exception of several pieces of jewelry, the forfeited assets reflect a simple life on the lam in a cramped apartment more than they do the legacy of an organized-crime boss. Theres office furniture, garment bags, and nine wide-brimmed hats. Dozens of books, broken into multiple lots, show Bulgers curiosity about World War II and the industry he helped create. His personal copy of American Mafia, by Thomas Reppetto, is for sale.

Most of the stuff is, well, crap. But its former owners make it significantly more valuable, a boon to the Marshals Service and the Department of Justice. Proceeds of the auction will be funneled into the DOJ’s asset forfeiture fund to pay court-ordered restitution to Bulgers many victims. Bulger was indicted on 19 counts of murder and found guilty of 11. Both he and Greig are in prison.

In the 2015 fiscal year, the marshals said, they sold $43.3 million in personal property and another $69.5 million in real estate. Because many of the auctions are done at the local level, in nearly 100 districts, theres no exact record of how many are held annually, though the marshals offer a conservative estimate of 400 to 500 a year.

Unlike private auctioneers, the Marshals Service doesnt take provenance into account when deciding on a lots opening price. Thats why the bidding for 30 books owned by Bulger, including seven mafia-related titles, will begin at $90. The market, not the marshals, will dictate how high it goes from there. All the government can do is advertise the sale.

Pricing low might work in the marshals’ favor, said Darren Julien, owner of Juliens Auctions, of Los Angeles, which frequently deals in memorabilia.

You want them to be conservative so it draws people in, but you dont want it to look too inexpensive, he said. When it comes to putting values on things, its not a science. I sometimes call them guesstimates.

The merchandise didn’t impress Patricia Donahue, whose husband, Michael, was killed by Bulger. “I just wanted to see if it looks the same here as it does online, like a yard sale,” she said. “It’s like an insult to the victims. I’d be very surprised if any of these things sold.”

How high the bidding goes will reflect Bulgers fame, as ticket sales for Black Mass did. John Gotti, Al Capone, and Bernie Madoff have all experienced similar fates. But the Madoff asset auction hosted by the Marshals Service included many items of high intrinsic value, including a 10-carat diamond ring and a Steinway grand piano. A revolver owned by Capone went for more than $100,000 at a Christies auction in 2011.

Firearms would surely bring in the bucks, but federal law prevents the Marshals Service from selling them. Bulger owned a variety of Nazi memorabiliaexcluded from the auctionwhose value wasn’t disclosed. Other items, like toilet paper and undergarments, were also excluded. Instead, Bulger will be proving his notoriety one sweatsuit at a time.

The biggest-ticket items at the Bulger auction are two rings, one a 14-karat gold, three-carat diamond Claddagh ring and the other a sterling silver ring known as the Psycho Killer Skull, which will start at $11,370 and $4,450. When Bulger set about taking control of South Boston, he is alleged to have killed members of the rival Mullen Gang, who were known to wear Claddagh rings, according to crime reporter T.J. English, who wrote the Irish mob history book Paddy Whacked.

In the universe of Whitey Bulger, the Claddagh ring symbolizes being a victim of Bulgers. That is one thing about Bulger, given his story and the violence and the disappearance of bodies,” he ventured. Some of these items to me would have bad karma.

Juju aside, the jewelry is expected to be hot at auction. The celebrity clout offers at least a 20 percent price boost but can often drive prices up more than 1,000 percent, said Leila Dunbar, who runs an appraisal business in Washington, D.C. No one can quantify passion or emotion. Its the celebrity value thats placed by the bidders that day, their connection, what they want to have, she said. Everything boils down to an emotional connection.

Even some household items can make that connection for mob enthusiasts. The Mob Museum, in Las Vegas, is considering purchasing several lots of Bulgers clothing to recreate an outfit the killer might have worn on the run. Geoff Schumacher, director of content, said the museum would purchase only used clothing, if anything.

A pair of shoes that were seized from that condo, that were clearly worn by the occupant of that condo, Whitey Bulger, will be more valuable than ones he never took out of the box, he said. Youre drawing a direct connection to a guy that was charged with killing 19 people. Its a more visceral connection.

As for Greig’s items, such as turtlenecks, a straw visor, and more than two dozen pairs of sunglasses, experts agree theyre likely to draw the least attention, though she was on the run with Bulger and charged with harboring a fugitive. She was the person that essentially kept this secret along with him, Schumacher said. But when you look at the actual objects that she had, they were the kind of stuff that my wife or any other middle-aged housewife might have.

The auction will probably alienate Bostonians who spent years living in fear of the local mafia. Julien, the auction house owner, said even diehard memorabilia buyers have been put off by auctions of O.J. Simpson collectibles, declining to bid up prices.

English, the crime reporter, said the auction could end the cult of Bulger, which has turned the cold-hearted killer into a movie star more than once. The sale symbolizes a fetish of a guy who was a violent sociopathic criminal but a fascinating character, he said, its wares meaningless other than what people input into these items. Why someone would want a pair of old sneakers is beyond me. But when you have Whitey Bulgers pair of sneakers .