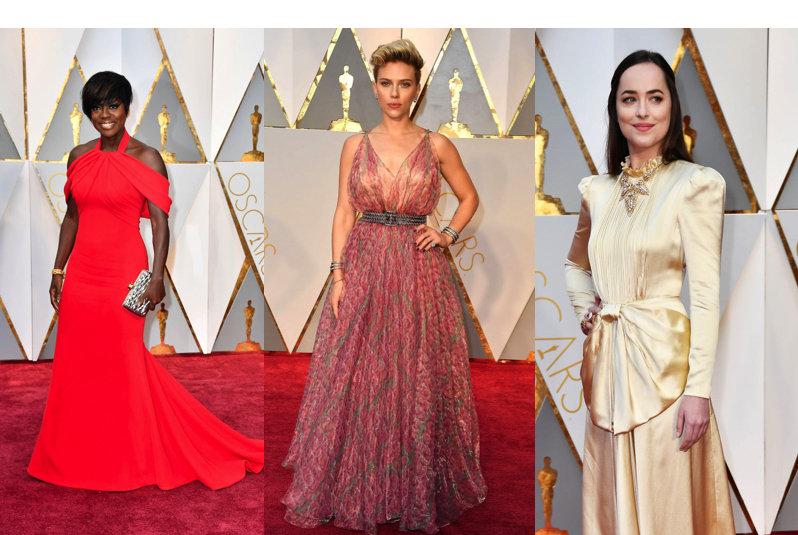 By now, we all know that the Oscars ended with a trainwreck of a Best Picture announcement. This gave no less than three people the chance to make awkward acceptance speeches in which they thanked people who perhaps should’ve done a better job so that the movie they were being mistakenly thanked for actually won.But approximately 4-5 hours earlier, all eyes were on the red carpet, where there were some amazing moments and some major fails. Hey, at least Anne Hathaway wasnt there this year. Lets see who can sit with us and who needs to try Sears next year.

Okay so I get that this is supposed to be super high fashion but what the fuck is this? If the Real Housewives existed in the 1980s, this is what they wouldve worn to dinner parties. Seriously, she needs to burn this dress ASAP, and also use some volumizing spray or something on her hair.

Isabelle is like the grandma version of that hot girl from college who went to Swiss boarding school and was way too cool for you to ever talk to. She’s probably one of the only people over 60 who could rock an ear cuff and black nails, and they weirdly work perfectly with her white Armani dress. We’re obsessed.

Janelle has always loved a quirky outfit, so she wasnt letting her Oscars moment go to waste. Her dress was supposedly Elie Saab, but were pretty sure weve seen it in every painting from England in the 1500s. Henry the 8th loved a sheer bodice, didnt you know?

Felicity must have known no one would care about what she was wearing this year, so she showed up in Diors version of a third-grade ballet recital costume. Simple can be a good thing, but this outfit kind of screams “virgin on prom night.”

Mahershala is our tall, dark, and handsome dream man, and he didnt disappoint in all black. I mean, Betches love all black. Oh, and he won an Oscar. Seriously, is it just us or is it hot in here?

Emma Stone is obvi gorgeous, but isnt this a little safe? Like, this is basically what Mia from would wear if she got dragged to a cocktail party by her boring boyfriend from the beginning of the movie. Emma, youre a big Oscar winner now, step it the fuck up.

First of all, Michelle brings Busy Phillips as her date to every award show.But real talk, her plunging neckline and raggedy looking skirt is a little played out. It also looks like she’s wearing a sarong underneath a long skirt. Were a little confused as to why her hair keeps getting shorter, like wont you be bald soon?

Okay were very confused by this. Her waist looks tiny (good job girl), but the top gets so wide that her boobs look ginormous. Did she get a boob job since the Golden Globes? Also, why does she look so worn-out and tired? I get that nationals are in just a few weeks but don’t let Sparky Polastri get you down. Get an assistant to follow you around with spirit fingers or some shit and perk the fuck up.

Stunning. Flawless. Yas. Taraji literally doesnt age, and her blue velvet off-the-shoulder look is like so good it hurts. Ugh, does this mean we finally need to start watching ?

Her dress was meh, but our issue was really with her hair. Did she accidentally go to a men’s hairstylist? There was something seriously weird about the wavy side bangs, and that ponytail is pathetically short. Charlize is probably like the 7th prettiest person in the world, so this is really a missed opportunity.

Even though Karl Lagerfeld said Meryl was too cheap to wear a Chanel gown, she looked like the classy legend she is. Tbh she could literally wear Snuggie and we would say nice things, because shes obviously NOT overrated.

Oh Ryan, sweet Ryan. Why why WHY does your tuxedo shirt have those fugly black ruffles? Did you just get back from a salsa class? Is this a trend in Canada rn?? Did Eva Mendes grandparents bring it back from their last trip to Cuba? Soooo many questions.

Halles always had some unconventional hairstyles, and this year she decided to go with a weird curly mop that basically makes her look like a black little orphan Annie. Versace claims to have made the dress, but it really has to be the same person who designed all those modern dance costumes we wore in middle school.

Nicole wore a flesh-colored gown for approximately the millionth time, but its way better than her Golden Globes dress, which was basically a beaded corset with pool floaties on the sleeves. Nicole gives zero fucks about the fact that this color makes her looking washed out, and I kind of respect that. Still, the dress kind of looks like she hot glued some doilies on the front at the last minute. Her jewelry was nice, but she always has this tragic accessory named Keith Urban hanging on her arm.

Viola finally won her Oscar, and she looked fucking amazing. Someone tell us how to get away with murder, because we would literally kill for this dress.

ScarJo was only there to present an award this year, so she clearly gave zero fucks about her outfit which must be why she purchased her belt from Hot Topic. Along with her edgy lesbian haircut, she basically just threw on an oversized floral scarf, added a belt, and called it a night. And by the way, its an Alaia.