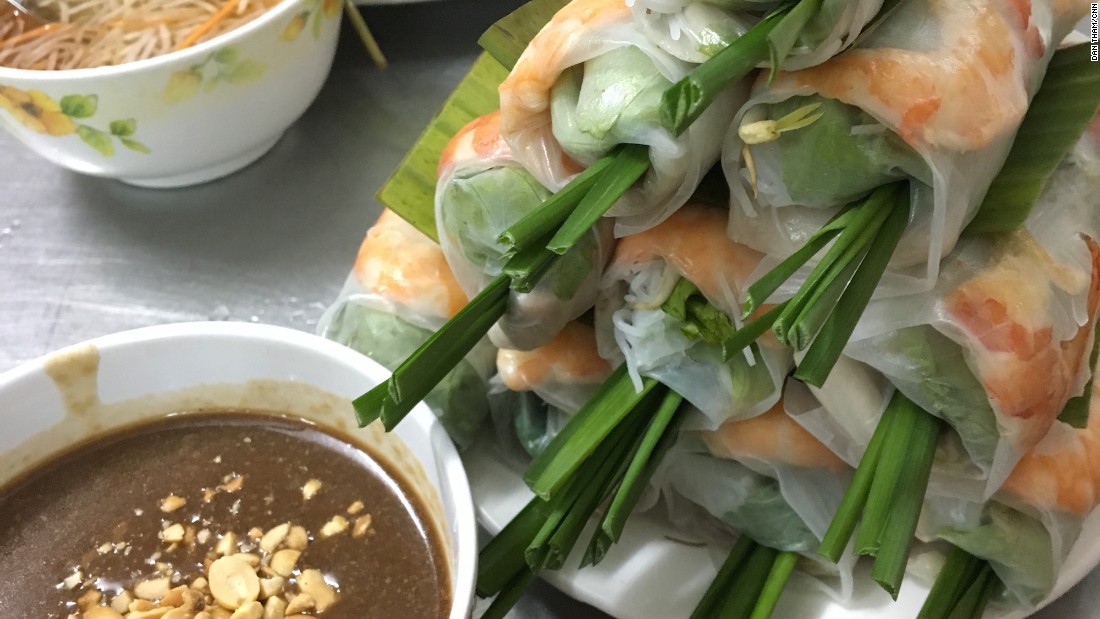 While Hanoi can lay claim to inventing pho, one of Vietnam’s proudest food exports, it’s in Ho Chi Minh City that visitors will truly discover the variety and breadth of Vietnamese cuisine.
Influences and regional dishes from all over the country crowd the streets, from the shrimp and pork filled tapioca dumplings of central Vietnam to the north’s bun cha noodles, popularized by President Obama and Anthony Bourdain earlier this year.
Thousands of vendors in this frenetic city lure the senses with herbs like coriander and lemongrass.
In order to prepare you (and your stomach) for your visit to Ho Chi Minh City, we’ve compiled some of Saigon’s best street food.

Consider bun bo Hue, a noodle soup that originated in the former imperial capital.
It’s made of vermicelli, generous slices of beef shank and a broth in which lemongrass and shrimp paste are the star players.
Add some basil leaves, banana flower and diced green onion to bring some freshness to the piquancy of this classic central Vietnamese dish.
To really kick things up a notch ask for some cubes of congealed pork blood.
MORE: 10 essential Vietnamese dishes every visitor should try

Turmeric powder, not eggs, lend this iconic southern dish its yellow color.
Banh xeo is named for the sizzling sound its batter makes on the skillet.
It’s made like a pancake and served like a crepe — if pancakes and crepes were filled with pork, shrimp and bean sprouts.
Dipped in fish sauce, there are also variants of banh xeo in Thailand and Cambodia.

This celebratory dish is made by roasting a whole veal calf until the skin is blackened.
Cut into thin slices, be thui can be eaten with Vietnamese coriander, sliced starfruit and green banana, all wrapped in rice paper and dipped in fermented shrimp paste.
Served at room temperature with pickled onions, it’s a sort of variation on the Vietnamese spring roll — see below.

The Vietnamese spring roll, not to be confused with its fried cousin, is a popular appetizer commonly made with slices of pork belly, shrimp, cold vermicelli noodles, and veggies like lettuce, mint and chives.

A recent street food invention from Ho Chi Minh City, banh trang tron, literally “rice paper mixture,” is basically strips of rice paper served salad-style with ingredients like quail eggs, julienned green mango and calamansi juice.
The version depicted in the video on the left is made of 16 ingredients.
It’s snacking at its most elaborate.

Steamed or sauted in tamarind sauce, fried or boiled in coconut milk, snails are an especially loved after-hours snack in Saigon.
Whether sourced from land, sea or freshwater, snails in Vietnam are perhaps more approachable than French escargot, but just as tasty.
MORE: Inside Hang Son Doong, the world’s largest cave

Here’s a dish where you can find the Chinese and Cambodian influences on the Vietnamese palate.
The rice noodles in hu tieu Nam Vang are thinner and more delicate than pho noodles, the broth is made with pork bone, and all of that is dressed with shrimp, pork liver, quail egg and green onion.
A solid lunchtime choice that’s lighter and refreshing.