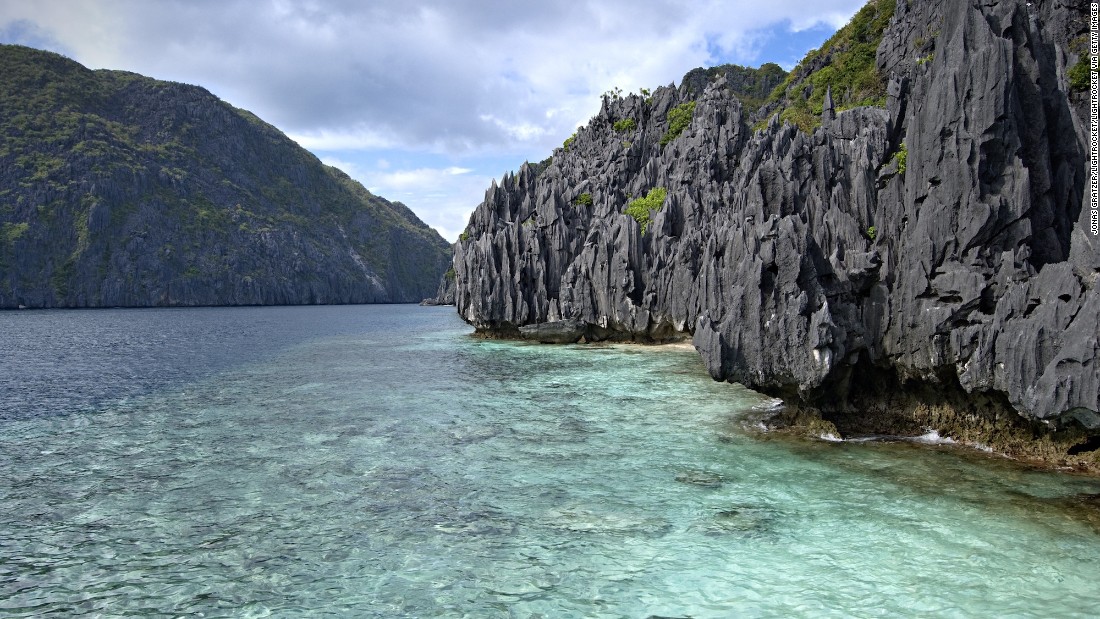 (CNN)“Get dropped off at the road by Las Cabanas beach about four kilometers (2.5 miles) outside of El Nido Town.

“Walk all the way to the end of the beach, then ask the people at the coconut stand for Mark and Camille’s house.”
Those are the instructions to find The Birdhouse — a new jungle glamping retreat in El Nido, a remote corner of Palawan island in the southwestern Philippines.
The hard-to-find address is the brainchild of Mark-Anthony and Camille Dimson Villaflor, who built The Birdhouse after traveling around the world on a 16-month-long honeymoon — documented on their blog 365 Travel Dates.
Inspired by the couple’s transformative trip around the world, the rustic-luxe tents offer a romantic refuge for honeymooners and adventure travelers. 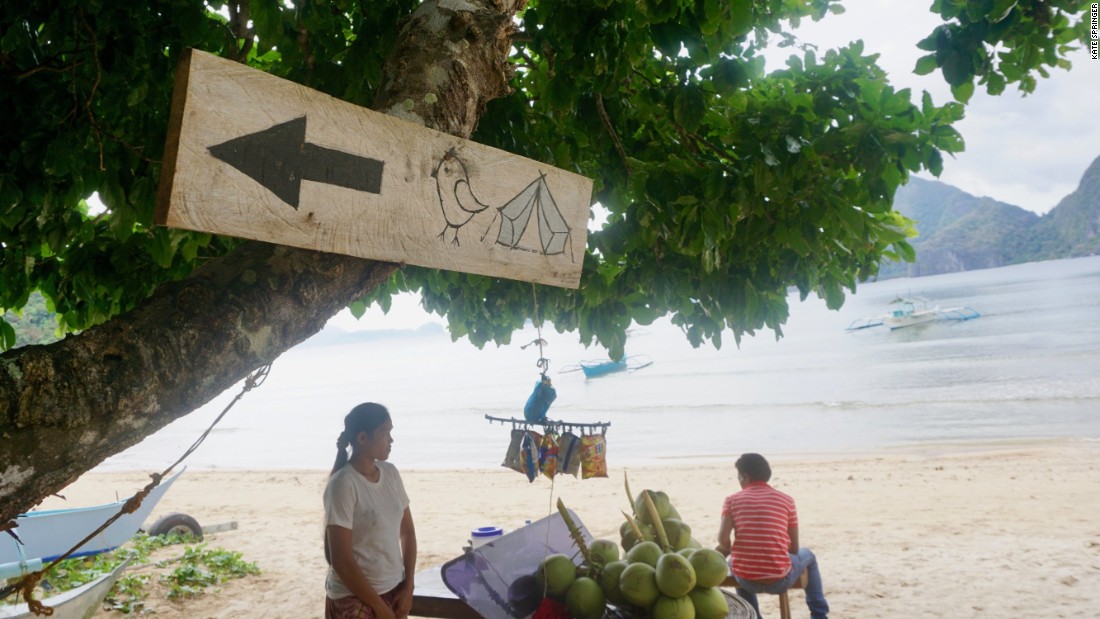 The Villaflors’ love story started in 2009 when they met through a friend.
Two years later, Mark was down on one knee at the W Hong Kong, proposing to the tune of Train’s “Marry Me.”
The pair legally wed two months later.
MORE: Palawan: Sailing’s next great destination?
“I moved from Singapore to Shanghai where Mark was working and we lived together for the first time,” says Camille Villaflor.
“That first year was hard. We were fighting all the time.”
A teacher at the time, Mark pitched his new wife a crazy idea: What if they took a year-long honeymoon?
“It sounded like the coolest thing ever, how can you say no?” she recalls. “But we were doing well with money and had proper jobs … We were just going to leave all of that to go on a sabbatical?”

It started with a trial run. The couple spent 40 days backpacking through Cambodia and western China. 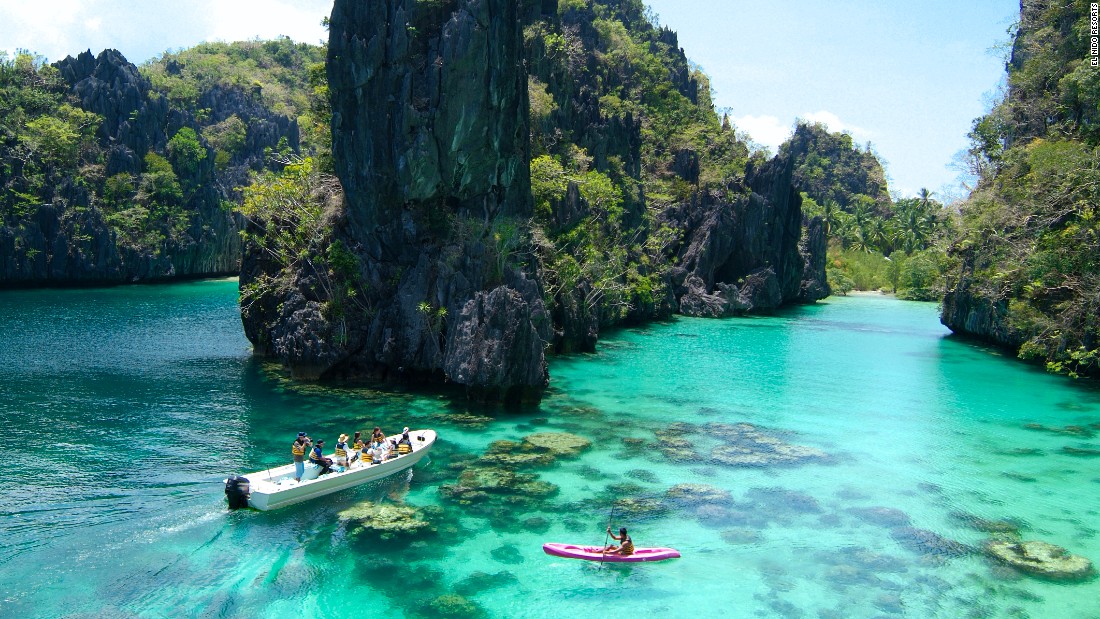 After the experience, the adventurous duo returned to Shanghai feeling refreshed.
“We knew then that travel was our common ground,” remembers Camille, who is originally from Manila.
“Instead of focusing on each other and our flaws, we were distracted by the amazing things we were seeing and we felt so grateful for the experiences.”
Convinced that a year-long honeymoon was totally doable, the couple began saving for the trip.

The couple took on several part-time jobs and worked weekends, investing 40-50% of their income each month towards the travel fund.
Mark estimated they could get by on about $100 a day, or $3,000 a month.
Once they had saved $30,000, the couple packed up two rucksacks — a 28-pound backpack for Camille and a 44-pound bag for Mark — and set out for the US to begin their journey. 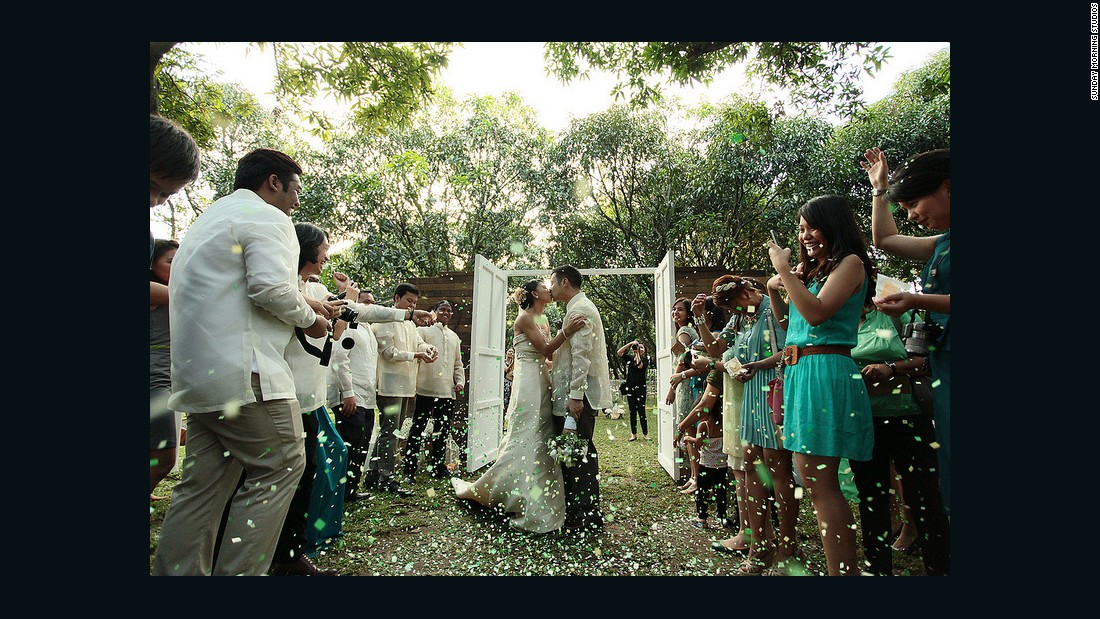 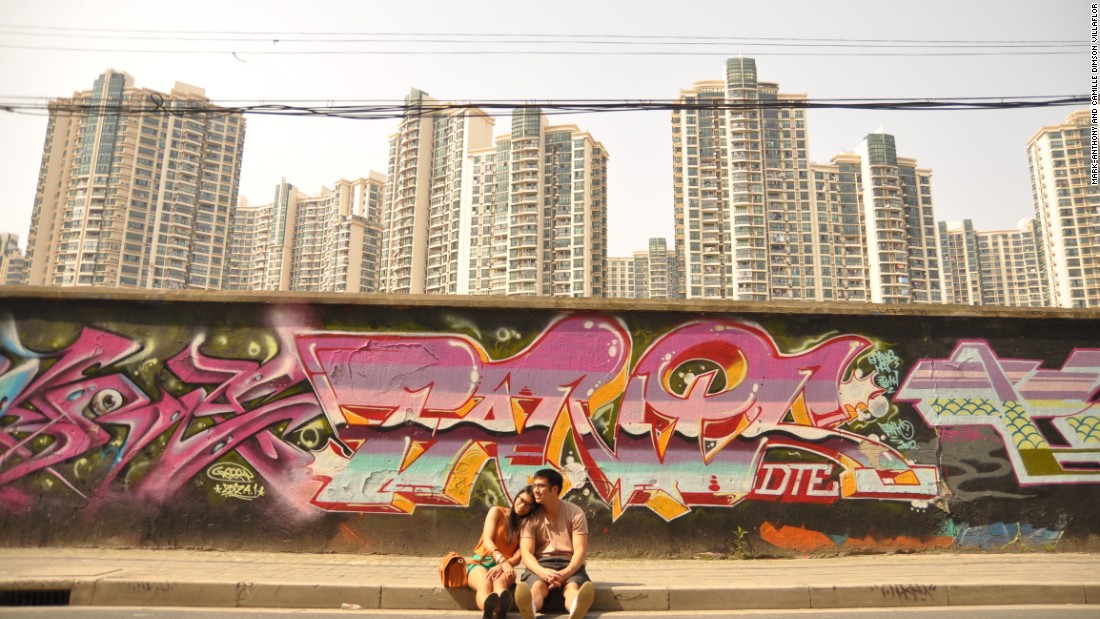 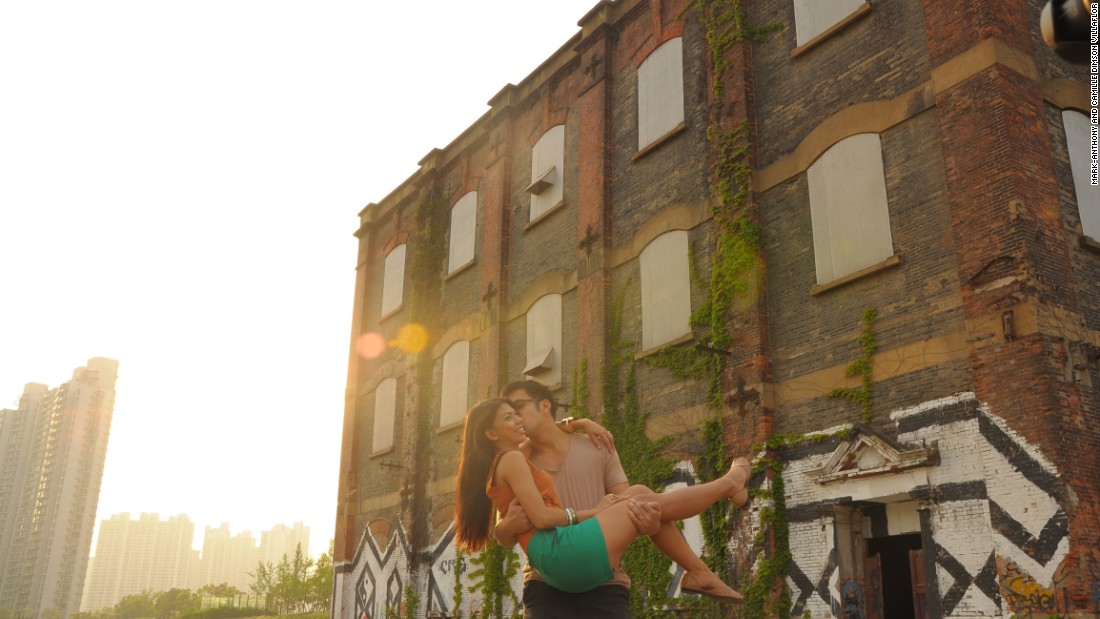 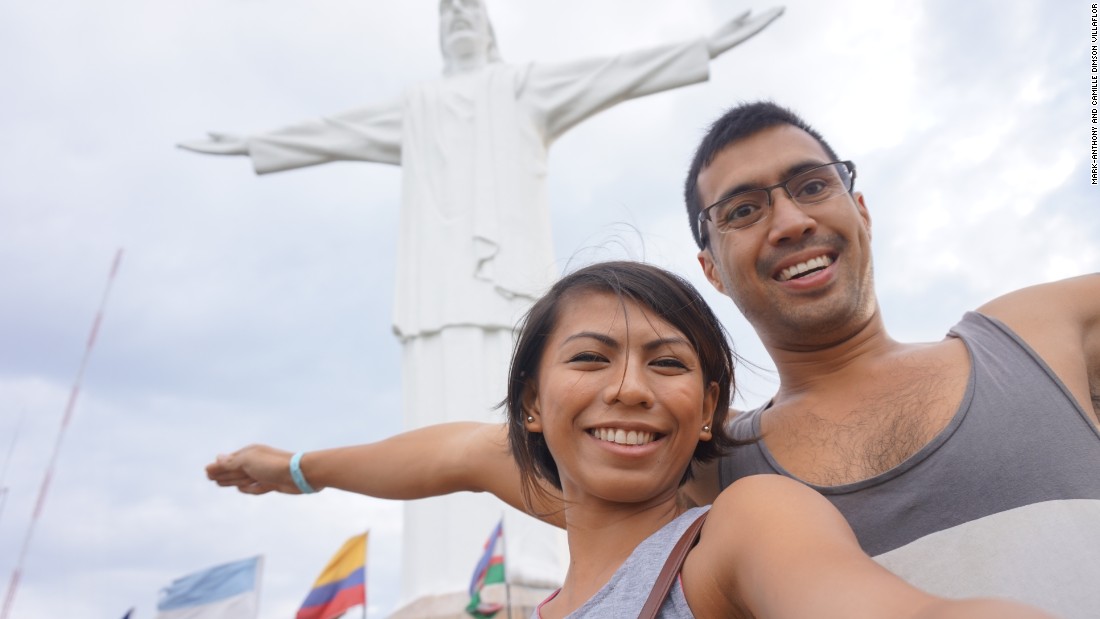 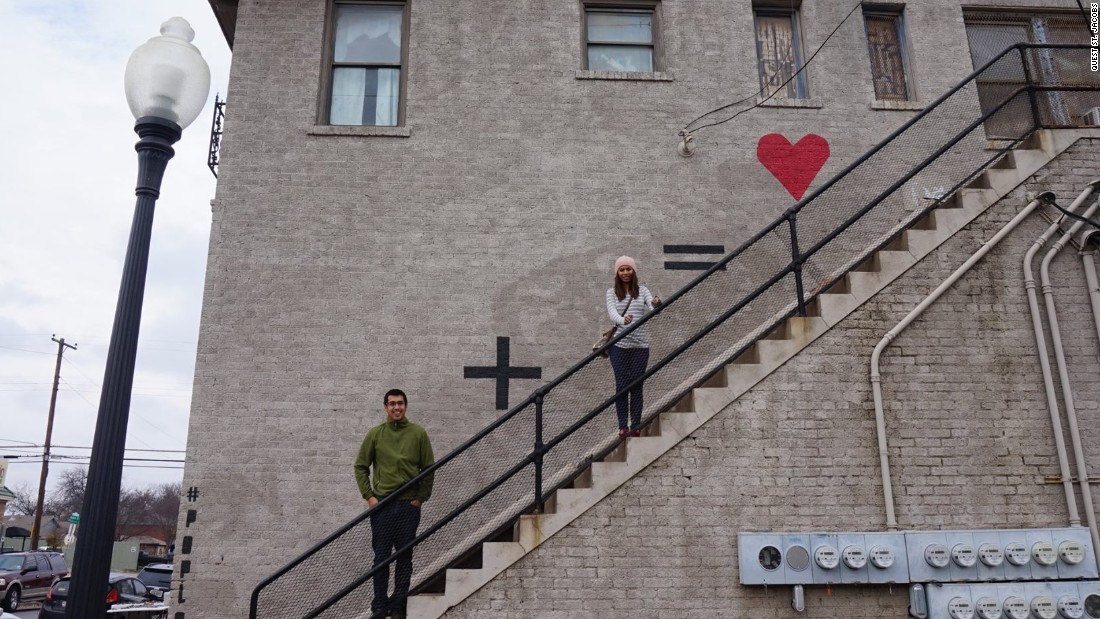 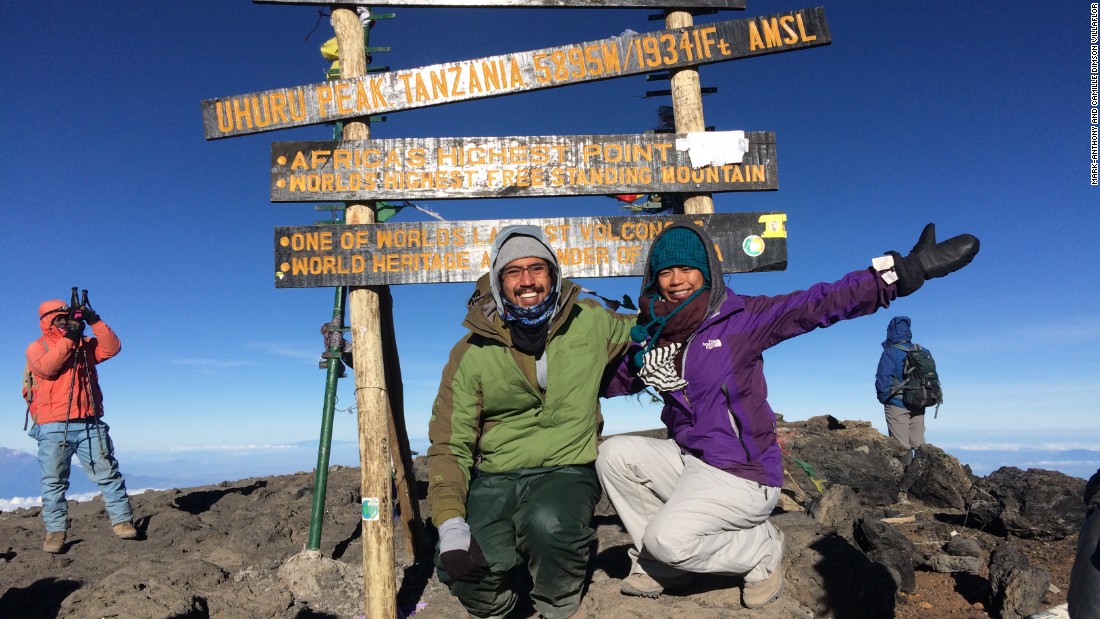 They took advantage of credit card travel promotions, collecting redeemable points and rewards. Mark estimates they opened 10 to 15 cards by the end of the trip.
The couple also worked along the way, taking on everything from check-in services at hostels to social media management, design consultation, blog reviews — even mopping floors.
“We had figured out blogging and social media by the fourth month or so, so we started pitching places — trading reviews and advertising for accommodations,” says Mark. 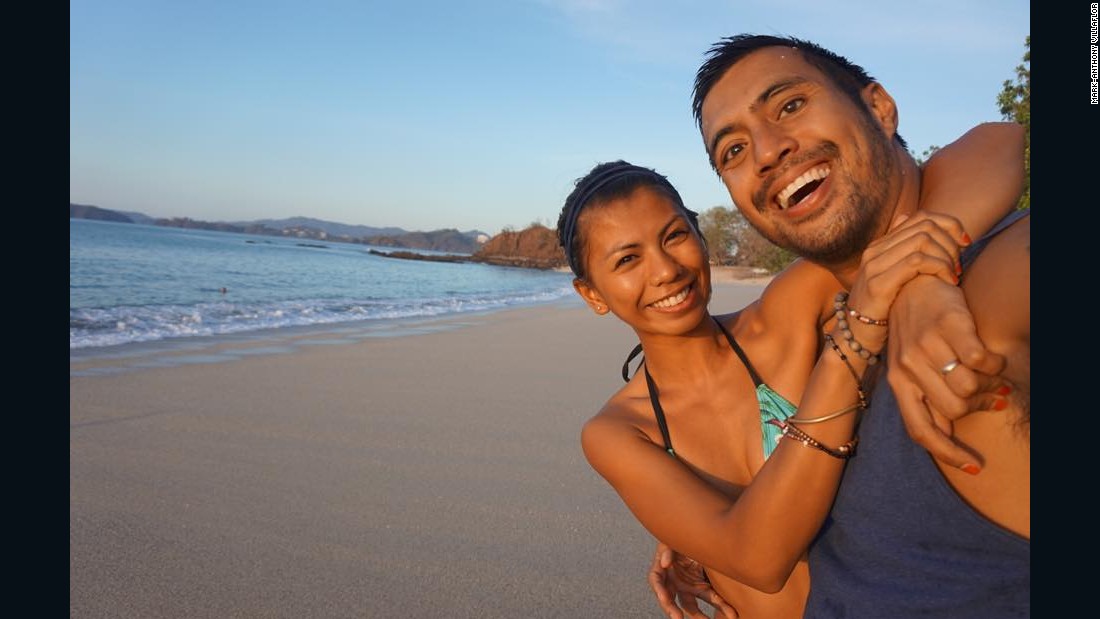 After 16 months abroad, Mark got a job offer in Austria.
To arrange visas, the couple had to apply in their countries of residence.
That meant flying to the US to take care of Mark’s passport and then over to Manila for Camille’s.
While waiting for Camille’s visa to be approved, the couple ventured to El Nido — a pristine corner of the southwestern Philippines.
Meaning “the nest” in Spanish, the remote beachside area is home to beautiful turquoise water and imposing limestone cliffs.
They hosted travel workshops while scouting out potential real estate investments on the island.
The couple could see that El Nido was due for a tourist boom.
They came across a half-acre plot of wild jungle, set back from the beach on a mountain.
MORE: 30 inspiring island escapes

“The terrain was very thick,” remembers Camille. “Mark went up and took me up later and we fell in love with the view. We decided to buy it — it was a no-brainer. “ 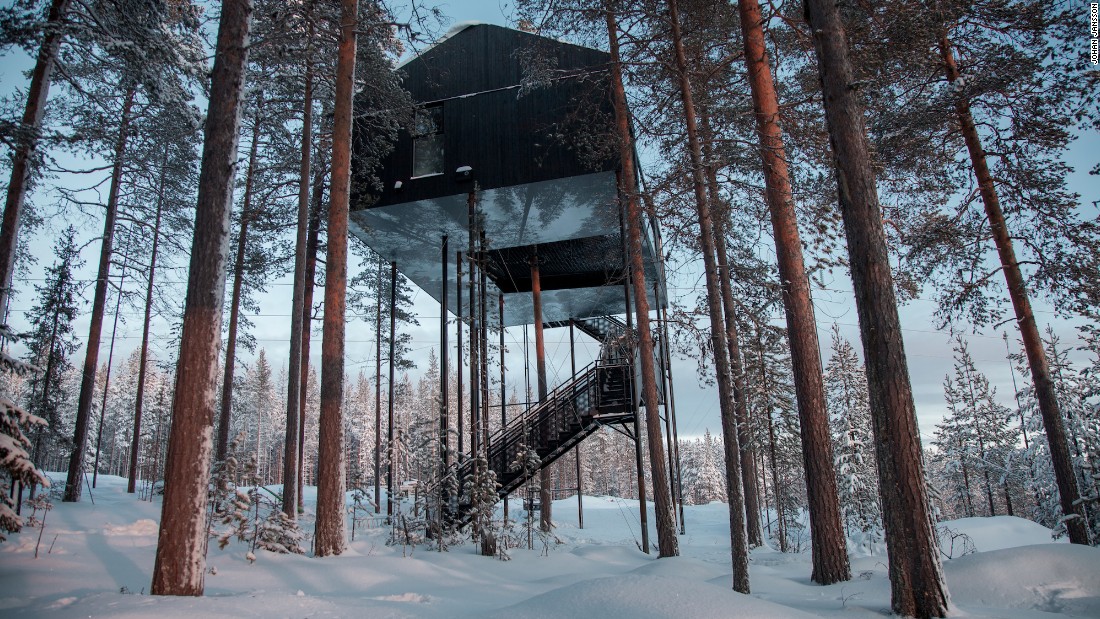 They bought the land in November 2015 and began building in February 2016.
“We had been unemployed for a year and a half, so we ended up selling a property in Manila to fund the construction,” says Mark.
Coming off a year of liberating travel, it wasn’t the most glamorous transition.
“We came from being totally free to working around-the-clock on construction,” remembers Camille.
“We had no electricity except fireflies in our room. We had no running water. It was rainy season and we were collecting rainwater and using it to shower and everything.”
“But we had a home,” Mark interjects. 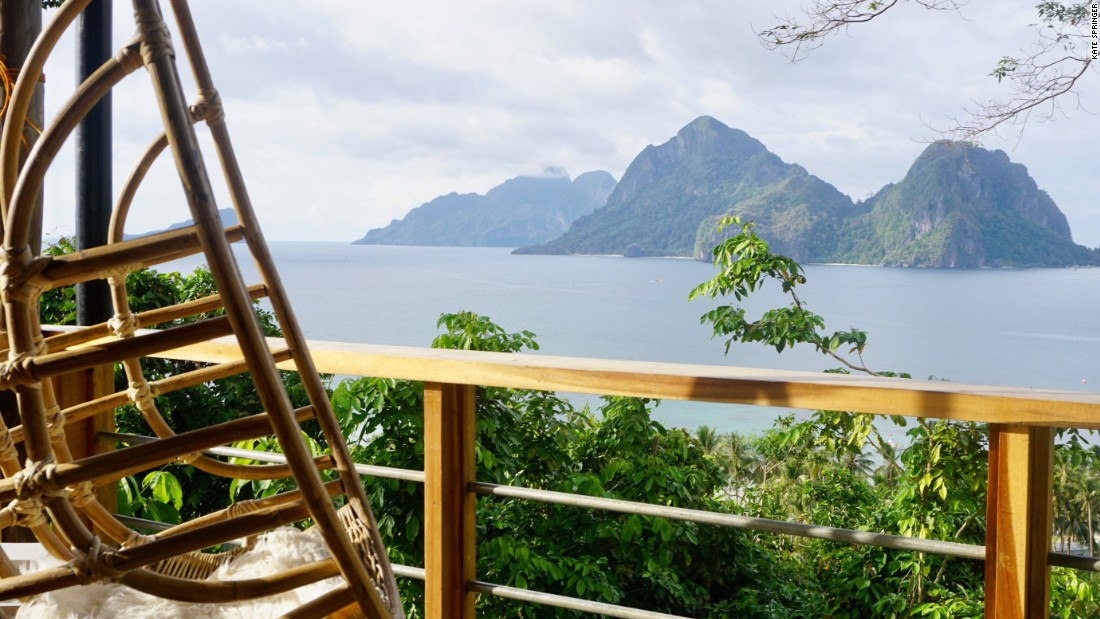 Six months later The Birdhouse opened with three glamping tents — which the couple dubs “nests” — and a communal lodge overlooking Marimegmeg Beach.
It’s so “off-the-beaten path” the couple had to build their own trail.
From the aforementioned coconut stand, hand-drawn wooden markers pegged to tree trunks lead travelers over bamboo bridges and deeper into the jungle.
After the short trek, a stairwell leads travelers up a steep mountainside where contemporary tents are visible between the tree branches.
MORE: World’s most unusual camping experiences
At the top, a treehouse-like lodge dubbed the “Mother Nest” triples as a lobby, restaurant and Mark and Camille’s home.
Designed by Camille, the communal house has an eclectic vibe, featuring romantic hanging bamboo chairs, Moroccan-style rugs, a library of travel books and a ukulele.
The couple’s cat lounges in the late afternoon sun, while guests enjoy a home-cooked meal and views of Bacuit Bay.
Below the main lodge, each tent sits on a platform in the trees, with a small porch to take in the sea view and a night sky full of stars.
Inside the canvas flaps, there’s a queen-size bed, a yellow carpet and locally made wooden furnishings.

But The Birdhouse aims to be more than just a unique getaway. 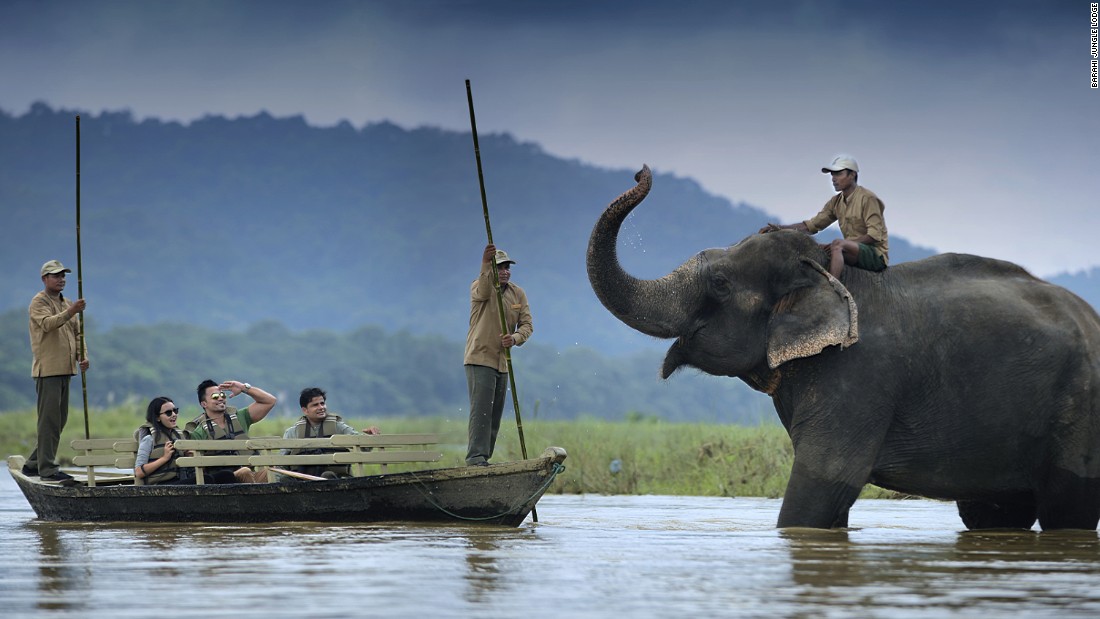 The short-term goal? A completely self-sustainable restaurant and retreat.
As for the bigger picture, Mark and Camille are in the process of introducing a waste-management nonprofit, with an aim to work with more hotels in the area and protect El Nido’s natural beauty amid an uptick in tourism.
The municipal tourism office estimated that El Nido received 12,000 monthly arrivals in 2015 — up from 10,000 in 1994.
“What normally happens in El Nido is that the waste management is viewed as an expense by hotels,” explains Shyo Sayajon, the retreat’s full-time permaculture designer.
MORE: 20 travel destinations the experts say not to miss
“Hotels transfer most of the expense to the local government, which is required to manage waste. Sadly, the local government doesn’t manage the waste effectively and ecologically.”
A former government employee, Sayajon moved into the field to make a more direct impact on the environment.
Sayajon has implemented several solutions at The Birdhouse so far, including composting, water recycling, natural water storage and organic gardening.
“I don’t think El Nido has even started to boom. But it’s coming,” says Mark.
“We want to present an eco-friendly lifestyle for other people and be an example for other hotels in El Nido to replicate.”