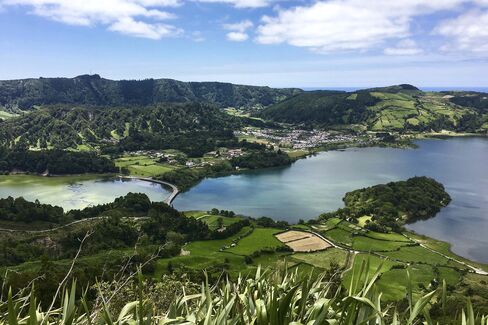 Millions of years ago, the earths gurgling mantle gave rise to nine small islands in the middle of the North Atlantic. Today, the Azoreswhich are located 1,000 miles off the coast of Europeis a quiet realm of quaint Iberian charm and dazzling vine-draped greens carved out by a dramatic history of volcanic events.

Like Iceland, the Azores offer gorgeous no-filter landscapes, a palpable not-in-America vibe (you’re in Portugal), and an ultra-convenient stopover locale on your way to Europe. Yet while their northern cousin is making the headlines for its record-breaking feats of tourismnumerous outlets have reported the country will have more American tourists than local residents by 2017the Azores remain remarkably under the radar.

Things are about to change.

Taking a cue from IcelandAirs transatlantic strategy, the newly rebranded Azores Airlines(originally called SATA) is upping its connections to major European cities in 2017; in theory, the carriers ultra-affordable airfares should drive interest in an Azores stopover. The plan is to operate 972 total flights next year (up 46 percent from 2016) connecting American passengers from Boston, Oakland, and Providence, RI, to destinations like Lisbon, Porto, Barcelona, Praia (Cape Verde), London, and Frankfurt. The new route from Boston to Barcelona, for example, will start at $549, including taxes.

While Iceland continues along a trajectory toward being a case study for rampant unchecked tourism, the Azores is hoping to find the sweet spot that boosts infrastructure without damaging both the tangible and intangible treasures that make the archipelago so unique. Heres what to know now to get ahead of the pack in the worlds next bucket list destination.

The nine isles of the Azores are organized into three geographic clusterseast, central, and westwith the most populous (and most accessible) island, So Miguel, belonging to the eastern group. Youll need a puddle jumper to leap between island groups, though public ferries will easily get you around each cluster.

You wouldnt go to Iceland and just stay in Reykjavik, so give yourself time to explore some of the outlying islands beyond So Miguela week is ideal.

On So Miguel island

Start at Sete Cidades, known as one of Portugals Seven Wonders (and readily endorsed as such by the flight attendants over the loud speaker when you land).

Follow their lead and check out the two captivating lagoonsone blue and one emeraldas they swirl together in the pit of a captivating crater. Hikers glide around the calderas perimeter, while others enjoy paddling in the ethereal waters below.

A stop in the aptly named village of Furnas is another must. Surrounded by steaming, scorched earth, the area has been a sought-after spa destination for over 300 years. There, you can bathe in the brackish waters of Terra Nostra Gardena cauldron of minerals and metals that refresh the skin. And dont leave the area without trying cozido, an Azorean stew-like version of paella cooked in natural mudpots over volcanic heat.

The bustle in Ponta Delgada, the islands main municipality, belies its small population of just over 70,000. Its the largest community in the Azores and its seat of government, sporting the archipelagos biggest airport and cargo harbor.

With a unique style of religious architecture sculpted from porous volcanic stone, the capital city’s colonial downtown area is best enjoyed in the evening with a walk among the twisting backstreets, or tapas along the waterfront. Vibrant street art aboundsits all sponsored by the cultural non-profit Walk & Talk Azoresadding pops of vibrancy to the citys black-and-white colonial dwellings.

On the outlying islands

If you can only get to one of the outer islets, prioritize Pico. Its a powerful counterpoint to So Miguel, with about a tenth of the population and a soaring volcanic peak (pico means “peak) whose shadow moves across the landscape like a sundial.

Climbing Picos witch-hat summit remains the islands most iconic experiencea trek that takes around six hours to the top and backbut there are plenty of other activities that make the destination worth visiting.

In the 19th century, Pico was one of Europes great wine producers, serving the aristocracy with a tangy pour found nowhere else on the continent. And although the wine blight all but obliterated the industry in the 1850s, its bouncing back. The island has continuously maintained an adegaor cellarculture where visitors can stop by to taste fortified tipples and buy a few bottles. Locals readily endorse Adega A Buraca, where you can play with 19th-century vintners tools and taste-test their wares. The place lives up to the hype. Go for the boozy verdelho, also a historic grape on Madeira, which makes an excellent digestif.

Pico is also an excellent place for whale watching, a transatlantic meeting point for countless species of marine mammals, in fact. The season runs from April through October, limited only by rougher seas in the colder months. Espao Talassa, established in the late 1980s as an observation base, provides 3-hour excursions at sea; its guests often see multiple types of ocean dwellers, from sperm whales to bottlenose dolphins.

Youll want to focus the bulk of your trip on So Miguel, where youll find a new crop of high-end hotels. All have conservative room counts, international service standards, locally sourced design, and a general sense of sustainability.

For Ponta Delgada urban life, try the Azor Hotel which opened in June to fill the palpable void of sleek boutique stays. Rooms are tastefully appointed with a less-is-more design ethos: blonde wood, crisp white linens, and floor-to-ceiling views of harbor. Azors sister property, Furnas Boutique Hotel, is roughly a 45-minute drive away, in a lush jungle setting. Both have great restaurants and design, but the latter caters more to spa-goersit has a massive network of thermal pools and aromatic showers that are fed by the local hot springs.

For something resembling more of a traditional beach holiday, check into Santa Barbara Eco-Beach Resort, a collection of semi-detached suites along So Miguels northern coast. Slabs of poured concrete sprout up from the polished floors, forming sculptural beds and sofas that mimic the black-sand beaches and undulating coastline outside.

Outside of the main island, do as the locals do and concentrate your search on Airbnb (or with local villa rental companies.)

Youll have a hard time finding a bad meal in the Azores. The fish always comes straight out of the water no matter where you go, and is best enjoyed with a heaping starter plate of freshly baked bread and cheese from the island of So Jorge. Wash it down with a briny, slightly effervescent glass of verdelho, and you’ve got yourself the perfect lunchthe main meal of the day in the Azores. This basic, delicious meal can be found in practically every eating establishment from high-end hotel lounges to hole-in-the-wall haunts full of fishermen.

These kinds of casual, no-need-to-plan-ahead meals will sustain you on your adventure-packed days, but at night, make reservations at either of the two best restaurants in the archipelago.

On So Miguel, theres Anfiteatro, the test kitchen for the archipelagos only culinary school, with 84 seats hidden under an imposing concrete staircase of Niemeyer-esque proportions. The restaurant showcases ingredients from across the islands on its four- and seven-course menus. On a recent visit, we loved the octopus, prepared with crisped mountain yam and buttery “O Morro” cheese from a local producer.

On Faial Island, search the backstreets of the old port village of Horta for Restaurante Genuino. There, the catch of the day is expertly prepared in the Azorean fashion: slightly undercooked and unmarred by excessive spices. A conservative smattering of salt, pepper, and some olive oil is all that’s needed to really let the fresh flavors sing. The fish itself is all caught by the namesake owner, a sailing prodigy who has circumnavigated the globe twiceboth times on solo expeditions.

If making the trek out to this little island hasnt already inspired you to follow in his footsteps, the restaurants dcorseashells from Tahiti, Balinese masks, and postcards from Mauritius that Genuino collected along his journeyswill certainly do the trick.