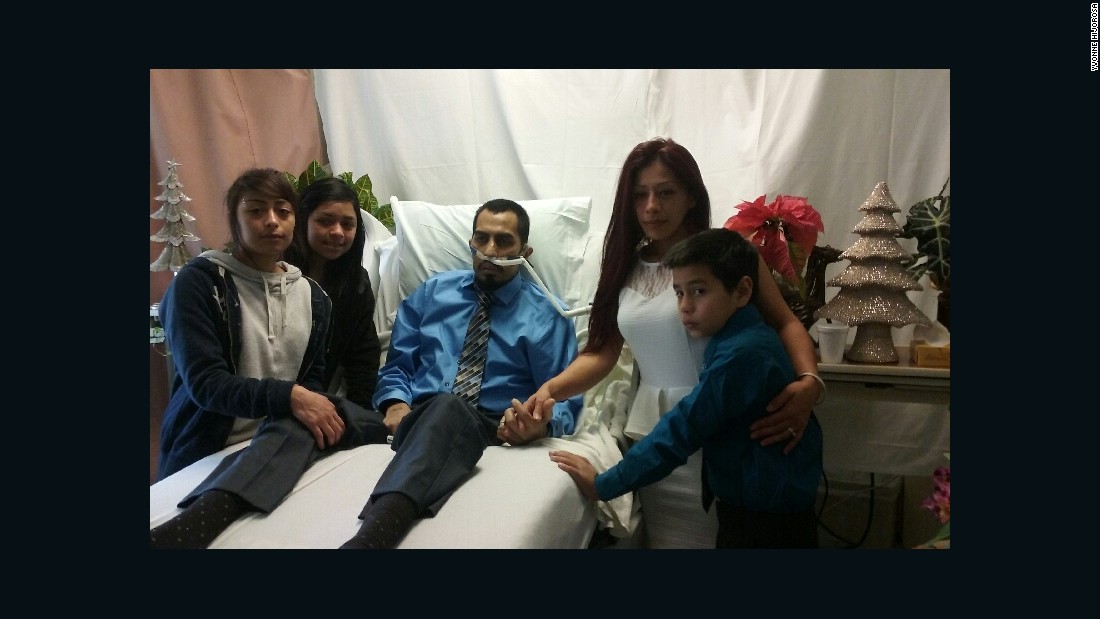 (CNN)On Friday, when the hospital chaplain asked Raul Hinojosa for his final wish, the cancer-wracked patient just said, “I want to marry her.”

His longtime fiancee, Yvonne Lamas, told CNN, “I looked around the room, and said ‘Who?’ That was just the way we played.”
Let’s do it, the chaplain said, and she left to get people to help make a dying wish into reality.
Family and hospital staff hurried to put a wedding together. One of the hospital’s chaplains took Lamas to the courthouse to acquire a marriage license. When they arrived, the judge waived the typical 72-hour waiting period, Lamas said.
The director of the critical care unit — who never wears a coat and tie to work, but had that morning after going to see his daughter’s Christmas program at school — shed his suit and gave it to Raul to wear for the ceremony, she said.
Cooks in the hospital’s cafeteria baked a wedding cake, and relatives ran out to get a dress for Lamas.
“It was a perfect fit,” said Angie Paiz, Raul’s aunt.
After Hinojosa was admitted to a critical care unit in Amarillo, Texas, in late October, Lamas had spent every day at his side, balancing his needs with the needs of their children at home.
Hinojosa and Lamas had been together for 11 years. “He was very respectful, very romantic and always wanted to give me the world,” Lamas said. “He knew how to put a smile on my face no matter the situation.”
They have a son who is 9, and Lamas has three daughters from a previous marriage, but Hinojosa took them in as if they were his own.
“As a father figure he was very loving, very caring to my kids,” Lamas said. “He gave them the world and was there for them when times were tough.”
“He was a good person. He was a giving person,” Paiz told CNN. He worked hard to provide for his family, picking up odd jobs even after he got sick because he couldn’t keep a steady one.
Hinojosa proposed in 2007, but he and Lamas had been waiting to marry.
“He was determined to give me the best fairytale wedding,” Lamas said. “He tried saving up, but within that time he ended up getting diagnosed with the leukemia.”
Hospital bills stacked up, and it started to look as if their dreams would never be realized.
But within a couple of hours, thanks to the collective effort of family and the hospital staff, the wedding was ready.
Nursing staff lined up outside the hospital room, and Lamas was escorted down the makeshift aisle by her father.
“When I walked down the aisle and saw him in the suit, he just took my breath away,” Lamas said. “He was so handsome. It was priceless.”
Her father delicately placed Lamas’ hand in Hinojosa’s, and the chaplain choked back tears as she recounted their story. “When this illness was diagnosed,” she said, “Yvonne promised she would never leave him. She would be with him. They would do this together.”
With his wife-to-be on his left and his son on his right, Hinojosa recited his vows.
With their children, family and friends gathered around them, Hinojosa and Lamas were finally married.
Hinojosa, 33, died of leukemia on Saturday, just 36 hours later.
When she signed her husband’s death certificate, it was the first time Lamas had signed her married name.