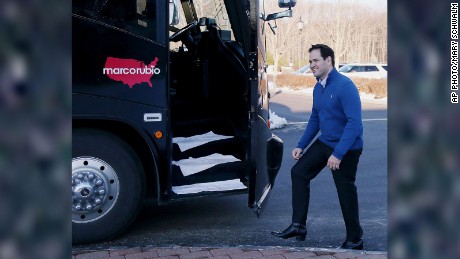 An ad from Bush’s Super PAC ad poked fun Rubio’s boots that he wore recently in New Hampshire. The footwear has been ridiculed by Rubio’s other primary challengers, though it has been praised by fashion magazines including Esquire and GQ.

MSNBC “Morning Joe” host Joe Scarborough asked Bush on Wednesday if he had any platform shoes to help him appear taller.

“I’ve got my cowboy boots on, big Joe,” Bush responded.

“Do they make you three inches taller or are they just normal cowboy boots,” Scarborough asked the 6’3″ former governor. Some have argued that Rubio’s boots were a ploy for the 5’10” senator to get a leg up.

“I don’t have a height issue,” Bush replied.

“I see a problem and I accept responsibility and try to fix things. I don’t try to say the dog ate my homework or there’s — you know, someone else’s fault,” he said.