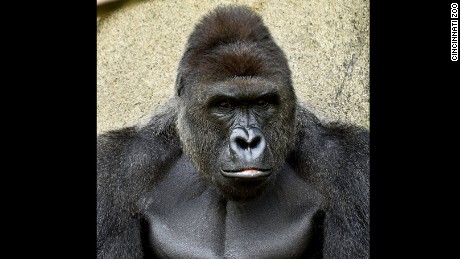 Those are some of the words the Cincinnati Zoo & Botanical Garden used Sunday in a contrite explanation for the death of Harambe, a 17-year-old western lowland gorilla killed on Saturday to save a boy who slipped into the zoo’s habitat.
The boy was in “imminent danger,” leaving the zoo’s Dangerous Animal Response Team with no option but to shoot the 450-pound gorilla, zoo director Thane Maynard said in a statement on Facebook. Tranquilizers may not have taken effect in time to save the boy while the dart might have agitated the animal, worsening the situation, Maynard said.
“We are heartbroken about losing Harambe, but a child’s life was in danger and a quick decision had to be made,” he said.
The words did little to assuage an angry chorus of critics who believed the gorilla’s death was unnecessary. Many blamed the boy’s mother for failing to look after her son. Neither the boy nor his family have been identified.
Some even suggested the boy’s parents should be held criminally responsible for the incident. An online petition seeking “justice for Harambe” through criminal charges earned more than 8,000 signatures in less than 24 hours.
Others criticized the zoo for responding with what they felt was excessive force. Demonstrators gathered outside the zoo on Sunday calling for a boycott.
“In mourning? You all killed him for protecting a child [whose] parents couldn’t contain their own children!!” said one commenter on the zoo’s Facebook page.

‘Not a good scene’

The boy, 4, was released unhurt from a Cincinnati hospital Saturday and the zoo opened on Sunday. Gorilla World, home to nine western lowland gorillas, was closed.
The incident drew widespread attention as dramatic video spread across the Internet showing Harambe dragging the boy like a rag doll through the water across the habitat.
The boy climbed through a barrier and fell some 15 feet to a shallow moat in Harambe’s enclosure, Maynard said.
Kimberley Ann Perkins O’Connor, who captured some of the incident on her phone, told CNN she overheard the boy joking to his mother about going into the water.
Suddenly, a splash drew the crowd’s attention to the boy in the water. The crowd started screaming, drawing Harambe’s attention to the boy, O’Connor said.
At first, it looked like Harambe was trying to help the boy, O’Connor said. He stood him up and pulled up his pants.
As the crowd’s clamors grew, Harambe tossed the boy into a corner of the moat, O’Connor said, which is when she started filming. Harambe went over to the corner and shielded the boy with his body as the boy’s mother yelled “Mommy’s right here.”
The crowd’s cries appeared to agitate Harambe anew, O’Connor said, and the video shows him grabbing the boy by the foot. He dragged him through the water and out of the moat atop the habitat, O’Connor said.
By that point, “It was not a good scene,” she said. When the boy tried to back away the gorilla “aggressively” pulled him back into his body “and really wasn’t going to let him get away,” she said.
O’Connor left before the shooting. When asked if the the barrier could be easily penetrated by a child, she said it would take some effort.
“Unfortunately, it was a bad situation where a 4-year-old didn’t have the attention of his mother for seconds,” she said. “I don’t think it was as easy as standing up and falling in. He actually had to climb under something, through some bushes and then into the moat.”

The zoo defended its safety barriers, saying this is the first time Gorilla World has experienced a breach since the exhibit opened in 1978. The exhibit is inspected regularly by the Association of Zoos & Aquariums and the United States Department of Agriculture, and adheres to safety guidelines, according to the zoo.
“The safety of our visitors and our animals is our No. 1 priority,” Maynard said. “The barrier that we have in place has been effective for 38 years. Nevertheless, we will study this incident as we work toward continuous improvement for the safety of our visitors and animals.”
Zoo officials said the incident lasted about 10 minutes. According to a Cincinnati Fire Department incident report, the gorilla was violently dragging and throwing the child, leading the zoo’s emergency responders to decide to put the gorilla down “to save the child,” the zoo said. The response team includes full-time keepers, veterinarians, maintenance workers, zoo leadership and security staff. All members are trained and certified annually by the Hamilton County Sheriff’s Office.
The People for the Ethical Treatment of Animals said on Twitter the tragic episode was the latest proof that “captivity is never acceptable for gorillas or other primates.” Western lowland gorillas are critically endangered in the wild, numbering fewer than 175,000, according to the zoo. An additional 765 gorillas dwell in zoos worldwide.
The zoo had its share of defenders and supporters, who weighed in on Facebook acknowledging the difficulty of its decision.
“I know that was a tough decision for the zoo to make,” one commenter said. “Now if that child was killed because they (the zoo) didn’t do anything then everyone would be up in arms.”
As another person said, “My heart goes out to all of the Zoo Family at this time. I am well aware of how difficult the decision was and it could not have been an easy one for the Zoo’s Animal Response Team especially as the staff at the Zoo goes above and beyond providing compassionate care for all the animals entrusted to them.
“It is unfortunate that to save the life of a child, an animal had to be sacrificed. Thank you to all the Zoo Staff for all you do for the animals. Wishing you peace.”