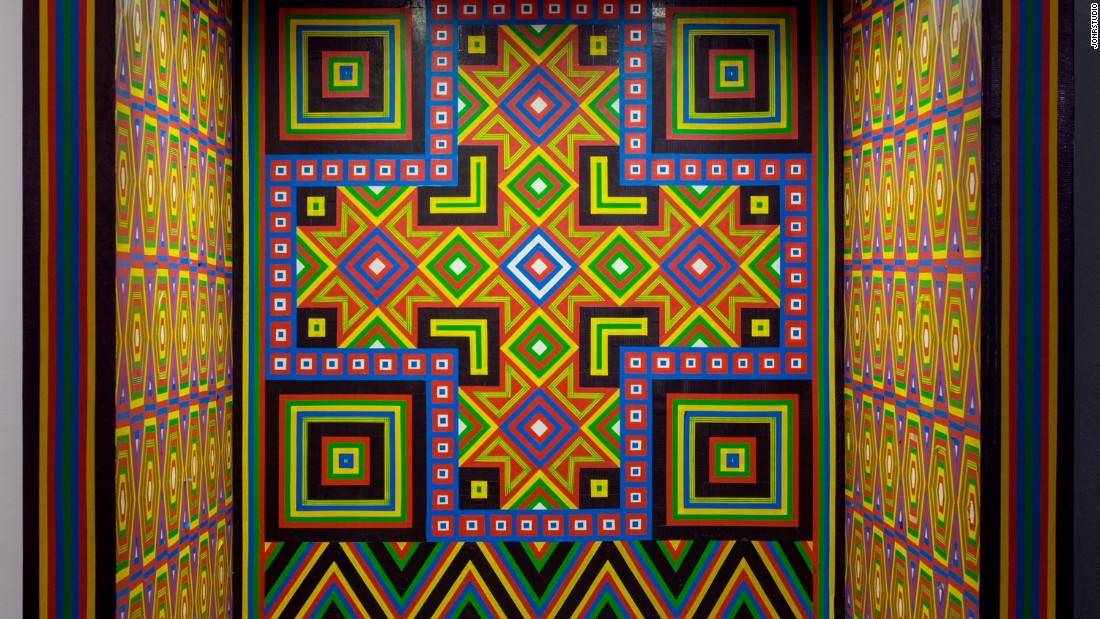 (CNN)As Venus orbits the Earth it traces the shape of a five-pointed star. Slice a cucumber, and you will see perfect triangles within.

“You can see geometry throughout nature at every level from the macro to microcosmic,” says Saudi Arabian artist Dana Awartani.
Geometric patterns also form the basis of Awartani’s work, and her hypnotic, intricate pieces have made her a rising star of the Kingdom’s fledgling art scene.
Aged 29, she has already exhibited at prestigious shows and biennales around the world alongside celebrated artists such as Indian sculptor Anish Kapoor and Japanese multimedia artist Yoko Ono.
There is a buzz around Awartani, and it is likely to get louder.

Awartani discovered her niche in London, where she studied for three degrees.
The artist was unmoved by popular European art forms such as life drawing. Instead, she embraced the classical Islamic style of “sacred geometry,” which uses geometric patterns to symbolize devotion and emerged over 1,000 years ago as a substitute for the forbidden depiction of divine figures.
But the style reaches far beyond her own faith, says the artist.
“The philosophy of sacred geometry is universal,” says Awartani. “There is a lot of sacred geometry in Jewish art, in the Kabala. Christians as well with icons and architecture … It is something that all cultures and religions are inspired by.”
Awartani recounts bonding experiences with Buddhists and atheists over geometry. She sees her art as an opportunity to bridge divides and promote interfaith understanding.
One recent piece exhibited at the Jewish Museum in New York recreated tiles from the Dome of the Rock in Jerusalem — a shared Jewish and Muslim holy site — which incorporated the six-point Star of David into Islamic geometric patterns.
Another work titled “Orientalism” takes on suspicion of Islam in the Western world, through an installation of a PVC-taped room that appears black from the outside, but opens to reveal stunning colors arrayed in Islamic patterns.
The piece signified that people in the West must get closer to Islamic culture to appreciate it.

The artist spends much of her time in splendid isolation in her studio in Jeddah, often working painstaking 15-hour days to produce pieces that can take weeks to complete. The process, she says, is deeply spiritual.
“When I’m painting, I don’t think,” she tells CNN. “Time flies when you’re painting.”
“There are so many things that can be seen as a form of prayer and meditation. I feel that my art does that. The process of creating is just as important as the end result.”

For inspiration, Awartani draws on Islamic geometry in ancient art and architecture, such as the Koutoubia Mosque, in Marrakesh, and the Alhambra Palace, in Spain.
She also admires modern variations, such as the form-twisting work of Iranian artist Monir Shahroudy Farmanfarmaian.
Awartani aims to marry tradition with innovation, experimenting with forms such as sculpture, installation, and — for an upcoming show in India — textiles.
“There is a lot of contemporary art out there that is like ‘what is art anymore?'” she says. “With the traditional art, sometimes it falls into a trap of being very decorative … I’m trying to reinvent traditional art in a way that makes it applicable to now.”

The Jeddah art scene does not rival the one in London, Awartani concedes — in the English capital, after all, talks and exhibitions are being held seven days a week. But she is confident that art is finding a foothold in her homeland.
“The art scene here is still really young, but within the past few years they have developed so much,” says Awartani, pointing to emerging forces in the field such as the Saudi Arts Council and the Arthr Gallery.
Still, there are still barriers to overcome.
“I do think education needs to be improved,” she continues. “The way that art is viewed; it’s not really seen as a profession here. It’s not seen as a necessity to study. There are a lot of girls I know here that are unbelievably creative and talented, but they just don’t really study art.”
Awartani offers herself as a mentor for aspiring artists, but her future is unlikely to be confined to one country. She plans to set up a studio in London, and put on shows across the United States and Europe.
The artist has a burning desire to showcase the beautiful side of Islamic culture across the world, and has total confidence in the power of art to build bridges.
“Art is the most important thing for representing a society,” she says. “Civilizations are not remembered for their bankers!”