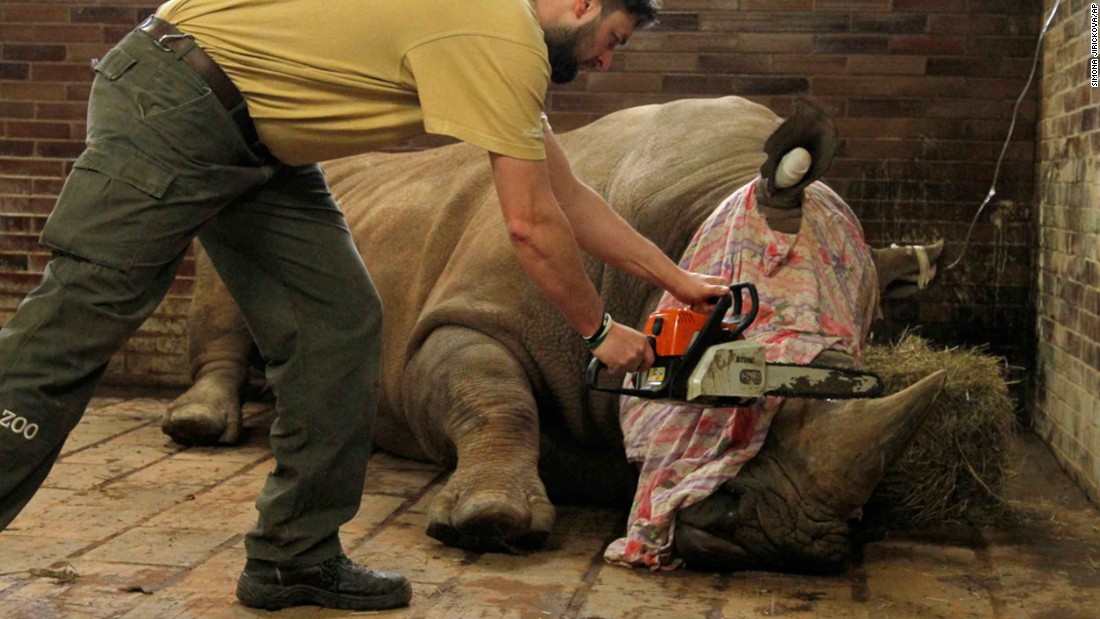 (CNN)A zoo in the Czech Republic has begun removing the horns of all its rhinos, saying it is better to leave the animals with stumps than risk them being killed by poachers.

The move comes in response to an attack two weeks ago on Vince, a 4-year-old Southern white rhino, at Thoiry Zoo in Paris. Vince was shot dead by poachers who sawed off one of his horns with a chainsaw.
Fearing more attacks, Dvr Krlove Zoo in the northern Czech Republic will remove the horns of its 21 rhinoceroses, officials there said.
Pamir, a Southern white rhino, on Monday became the first to lose his horn in a procedure carried out by a veterinarian under anesthetic. 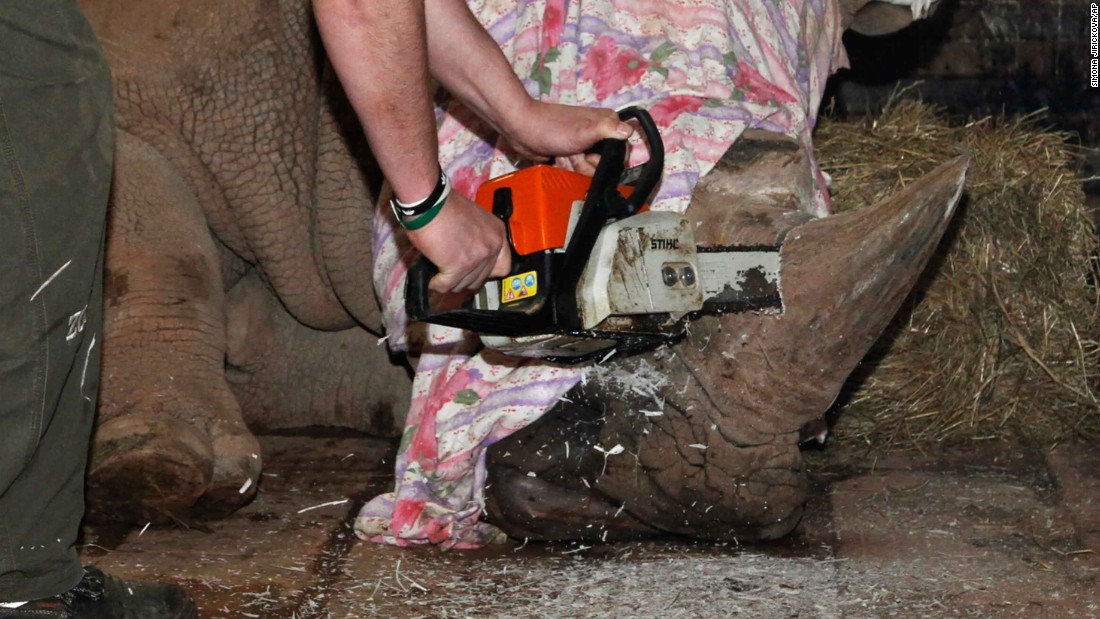 The decision to remove the horn was difficult and sad, Jan Stejskal, director of international projects at the zoo, told CNN.
“We understand it is a natural thing for a rhino to have horns,” he said. “We would love to keep them untouched. I was there during the procedure on Monday, and emotionally I didn’t like it.”
“But it does not hurt the animal, and this is a necessary measure that can help us reduce risk,” he said.

“We always knew something could happen, and we didn’t want to dehorn, but Thoiry happened, and it means many other people could get the same idea,” Stejskal said. 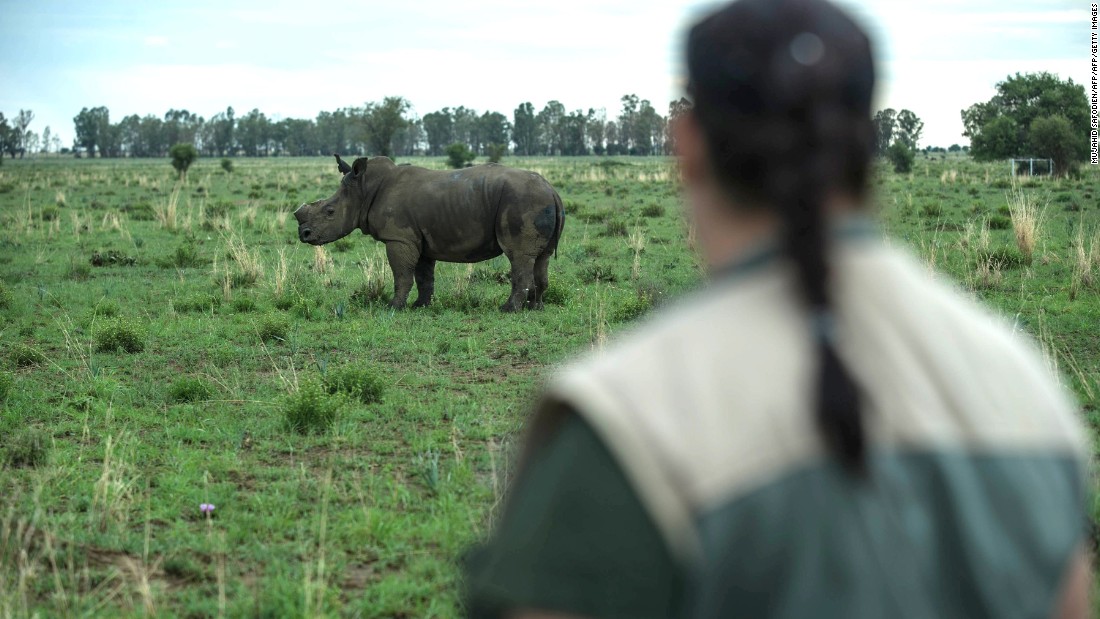 Zoo director Pemysl Rabas acknowledged the risk of complications as horns are surgically removed. The decision to dehorn was “not made easily,” he said in a statement, but added that “the dehorned rhino is definitely a better option than the dead rhino.”
Like hair and nails, horns are made of keratin, and removing them does not hurt, he said. Andrea Jirouov, a spokeswoman for the Czech zoo, said the horns will grow back, on average about two centimeters a year. It’s not known when the procedure may need to be repeated, though officials hope circumstances improve so that such a radical step will not need to be taken again.

All five rhino species are on the endangered list. They often are victims of poaching in the wild because some people believe their horns have medicinal properties.
Horns can be sold on the black market for around $60,000 per pound — more than gold, diamonds or cocaine. 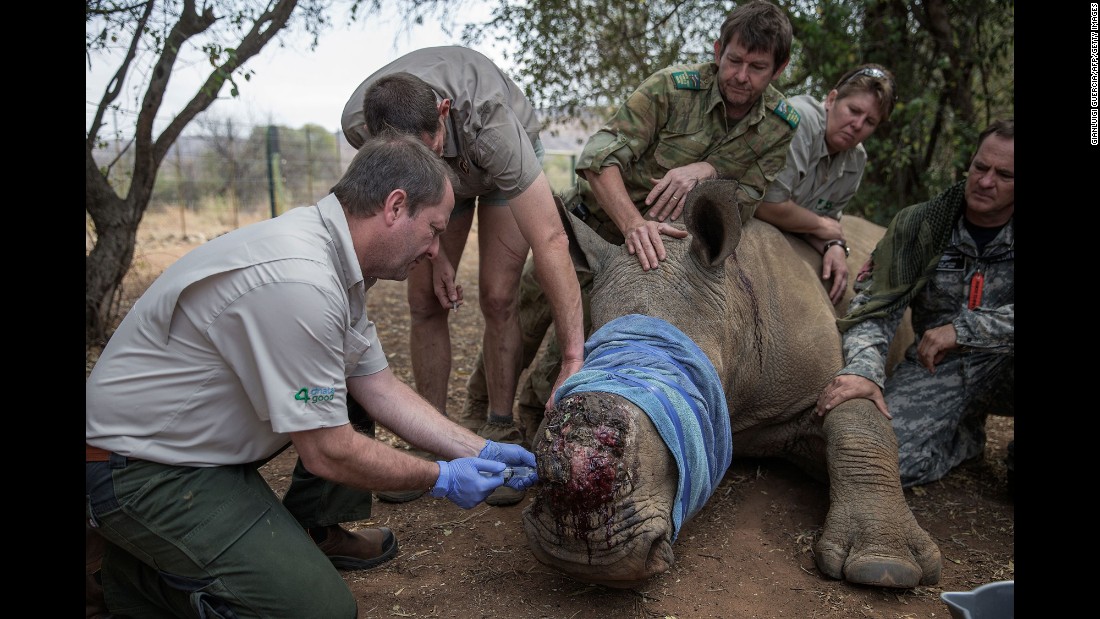 Dehorning operations have taken place in parks and reserves in Africa — and another zoo in Europe, Pairi Daiza in Belgium, has also decided to take the drastic step following the Paris attack.
All three of Pairi Daiza’s adult rhinos have undergone the procedure, spokeswoman Aleksandra Vidanovski told CNN. “We have no intention of doing this regularly, but we will reevaluate the situation in due course.”

Though fear is raw following the Paris attack, the European Association of Zoos and Aquaria has not issued a “blanket recommendation” for its 345 member institutions regarding rhinos, communications manager David Williams-Mitchell said, adding he is not aware of a large-scale movement to dehorn rhinos across the continent.
The organization’s members are working closely with law enforcement agencies to prevent attacks, he said, and there is no evidence to suggest that poaching gangs plan to target other zoos.