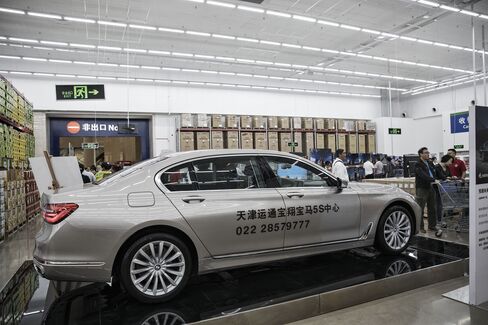 In the U.S., Walmart Stores members-only warehouse chain, Sams Club, offers a wide array of products, from bulk groceries to patio furniture, at discounted prices in cavernous, no-frills stores where goods are stacked on metal shelves. Walmart is doing the same thing in China but with some pricey twists, including $3,200 Zojirushi rice cookers and $295,000 diamond rings.

Over the past two years, the retailer has repositioned the 14 Sams Clubs in the country to offer more expensive products. Shoppers can pick up $500 Dyson hair dryers, $1,700 bottles of 1995 Chteau Lafite Rothschild red wine, and $7,000 high-tech massage chairs, in addition to imported pistachios and desserts conjured up by Michelin-rated chefs. Theres even a $4,100 Laurastar ironing system that comes with four hours of in-home instruction. Unlike its small business focus in America, Sams Club on the mainland is all about catering to the whims and preferences of an emerging middle and upper class willing to spend more for premium items.

Our member is a very aspirational shopper, says Andrew Miles, chief operating officer of Sams Club in China. Their desire is for a better life and to show their wealth to their family and friends, to show that they are a smart, savvy shopper. Thats the ambition we want to fill.

Walmart sees big potential in China: Its Sams Club in Shenzhen, a fast-growing urban center in the southeast, is the chains best-performing outlet globally. Walmart, which posted $482 billion in revenue for its fiscal year ended Jan. 31, doesnt break out China sales, but it says the growth of clubs there is among its fastest globally. Chinese memberships now number 1.8 million and are growing 10 percent to 12 percent annually.

In addition to rolling out a premium product lineup, the retailer almost doubled its annual membership fee in April, to 260 yuan ($40), to attract more upscale shoppers, those earning at least $25,000 in yearly household income, roughly three times the nations average in 2014. Miles says members remaining after the fee increase spent 8 percent more on average per visit.

Sams Clubs potential in China is greater than anywhere, says Walmart Chief Executive Officer Doug McMillon. Members want a fine bottle of wine, they want a great fresh-food experience, they want a 4k television, he says, referring to the latest high-resolution technology. Even a $15,000 price point can be a great value for what you are getting.

That upmarket tackfrom a Samsung curved TV for $26,000 to a 61-bottle collection of Mdoc wines, complete with its own cooler, for $14,472capitalizes on a Chinese bias toward imports. They see them as higher-quality and safer after domestic suppliers experienced some recent well-publicized food-safety concerns. I dont have to go through online channels to get foreign brands now, says He Lihui, a 35-year-old sales executive who was shopping at the Shenzhen Sams Club for Wonderful brand pistachios from the U.S. and waffles made with European ingredients.

Sams Clubs own brands, such as its Members Mark private-label oatmeal and kitchen towels, or the Asda brand developed for Walmart stores in Britain, arent perceived as high-end in their home markets, according to Jack Chuang, OC&C Strategy Consultants Greater China partner. But Sams Club has been pitching the foreign provenance of its house-branded items and selling them for less than what imports generally cost in China. What theyve done in China is a rebranding exercise using the fact that to Chinese shoppers, imported is a badge for premium, he says.

Walmart aims to more than double the number of Sams Clubs there to 35 in three years, and its built an entire mall with a 1,900-car parking lot for a 5,000-square-meter (54,000-square-foot) store in Zhuhai, near the casino island of Macau. The investment in the new mall, which has leased space to Starbucks, Uniqlo, and other big brands, became necessary because other potential retail sites lacked adequate parking. Similar projects with malls anchored by Sams Clubs are planned in Jiangxi and Guizhou provinces.

Sams Clubs success is in sharp contrast to the performance at the 412 Walmart-branded stores on the mainland, where McMillon says sales are flat. Big brick-and-mortar retailers such as Walmart and Frances Carrefour have struggled as Chinese consumers increasingly turn to e-commerce platforms for electronics and other non-perishable goods, both of which are high-margin categories at Walmarts large stores in China, says Wai-Chan Chan, a senior partner in the Asia-Pacific retail and consumer practice at consultant Oliver Wyman.

In an attempt to remedy that, Walmart on Oct. 20 announced a distribution partnership with JD.com, Chinas second-largest e-commerce company after Alibaba Group. Customers can now order Walmart items from around the world through a store on JD.com; theyre delivered using the e-commerce companys sprawling fulfillment system, which reaches homes in 90 percent of the country. Already, customers living near 20 Walmarts can get purchases delivered within two hours; more stores will be added later.

Sams Club has also opened a flashy online storefront on JD.com, making its items available to nonmembers for the first time, albeit at a 10 percent premium. Were indifferent as to the format, McMillon says. Our job is to make sure that we are there to serve customers however they want to be served. One bonus from boosting online access: Sams Club can use the geographic data from e-commerce sales to identify where it should set up warehouses next, says Walmart Chinas senior vice president for e-commerce, Ben Hassing.

Sams Club has no major club rivals in China. Its biggest American competitor, Costco Wholesale, doesnt operate brick-and-mortar stores there. That could change: Costco opened a store on Alibabas Tmall online platform last year, a move OC&Cs Chuang describes as dipping their toes into the water. For now, Sams Club has the pooland the growthto itself.

The bottom line: Sams Club in China, whose membership is growing at 10 percent to 12 percent annually, is repositioning itself to sell pricier goods.