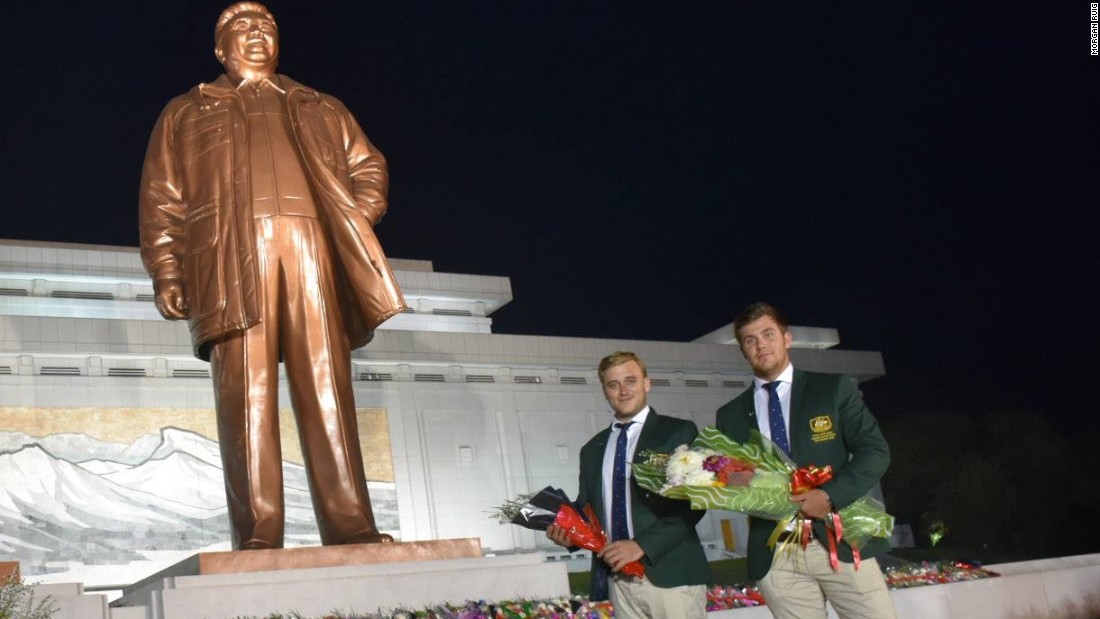 “Pair prank their way into North Korean golf tournament,” read Brisbane’s Nine News.
“2 Australian men pretended to be pro golfers and faked their way into the North Korean Open,” proclaimed SBNation.com
Even Golf Digest fell for it: “Pair of Australian hackers pull ultimate prank by posing as pros to play in North Korea Golf Championship.”
Now, a less-than-impressed North Korean government wants the Australian pranksters to apologize.
“We’ve been told by the travel agent who arranged the trip that North Korea wants us to go back to make an official apology on live TV,” Morgan Ruig told the Courier Mail.
“Yeah, no… we won’t be doing that any time soon.”
“Years of hard labor in a North Korean prison doesn’t exactly appeal.”

Morgan Ruig and Evan Shay — a real estate agent and a builder, respectively — had just wrapped up a polo event in China when they decided to go out on a limb.
They sent an email to the golf tournament organizers and, to the pair’s surprise, it didn’t take long to score an invite — although a little creative wording did help.
“We said we were a couple of Australian golfers. And they wrote back asking if we were the Australian team. And we sort of swerved around that question and thought we’d run with it,” Ruig said.
Read: Why South Korea is so good at golf
Soon, Ruig and Shay would be gracing the reclusive nation’s only course — which it bills as the world’s most exclusive. It’s also where late leader Kim Jong Il is said to have made 11 hole-in-ones.
Now the pair just needed to look the part. So they found a tailor in Beijing who made them very official-looking green jackets, complete with an Australian emblem and the inscription “Polo and Golf Grand Slam Tour The Orient 2016” underneath.
Read: The $74M North Korean golf course that no one plays
It seems everyone thought this plucky duo was the real deal … until they teed off.
By the end of the 18th, Ruig and Shay had hacked their way to abysmal scores of 120 and 126 respectively. They only finished ahead of the teenage daughter of another country’s ambassador.

So, what really happened?
The Amateur Golf Open at the Pyongyang Golf Complex isn’t something the North Korean government puts on. It’s an annual event hosted by UK-based tour company Lupine Travel.
You don’t have to be a pro. You don’t even have to know how to play golf.
All you have to do is book through the tour company and you can take part — no “duping” required.
It says so right on its website: “Bookings are taken exclusively through British travel agents Lupine Travel.”
That would explain why the guys weren’t asked any questions. That would also explain why they were wined and dined and taken care of so well. The price of booking includes “breakfast, lunch and dinner each day.”
Visit cnn.com/golf for more news and videos
And that would also explain why their photos are so prominently displayed on Lupine’s site.
Also, they needn’t have bothered with the custom-made jackets. Some played with windbreakers on, and the tournament also included a bride and groom in their wedding outfits.
Ruig told CNN that Lupine organized the tour and the men’s visas. He wouldn’t say any more.
But hey, it’s a great story … almost.