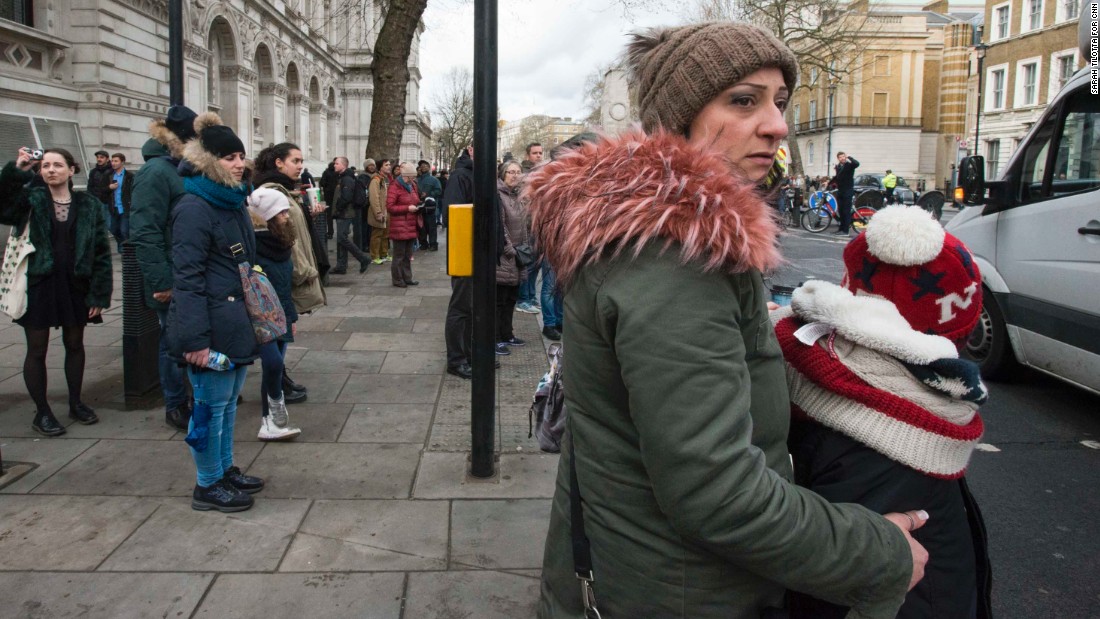 London (CNN)The big red buses sit abandoned on the bridge, six of them. Nearby are two black taxicabs, also empty. No passengers, no drivers, no pedestrians.

This area is rarely still, and never on a spring Wednesday afternoon. It should be packed with visitors, locals and the occasional parliamentarian.
Of course, it’s not still even now. Slowly, then overwhelmingly, the noise takes over the senses — a cacophony of sirens and chaos.
This is London in the wake of a terror attack. A yet-to-be-identified attacker rammed pedestrians along the popular walkway, before crashing the perimeter railing outside Parliament, the heart of British political life. Taking off on foot, the assailant continued his rampage, stabbing to death a police officer before he was killed.
Four people died in addition to the attacker, at least 40 more victims were injured, authorities say.
READ: Police zero in on killer’s identity
“I saw a car, the crunch of car hitting the curb. I kind of thought the guy had maybe had a heart attack or something,” 34-year-old Rob Lyon tells CNN. “It hit several people. I jumped out the way into a road, [my] colleagues jumped the other way towards the Thames but held on, thankfully.” 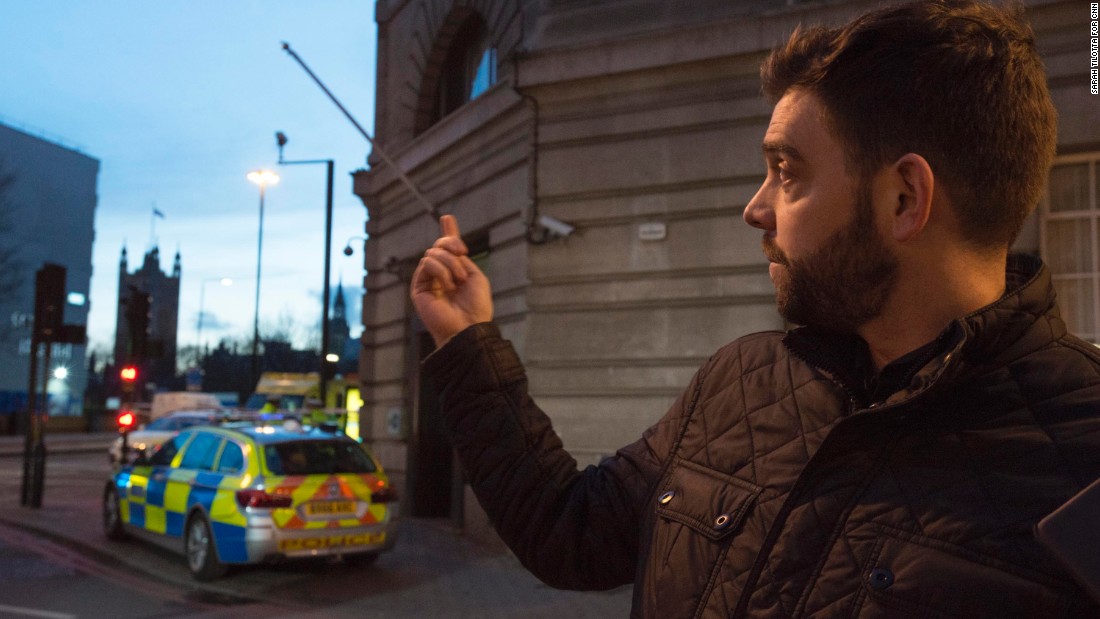 The campaign director from Rugby, a town in central England, witnessed the assault at Westminster as he and colleagues were walking across the bridge. He says he expected the car to hit the bridge wall but it continued going, deliberately mowing down people on the sidewalk.
“I stood in shock and saw carnage around me and the car carrying on up the bridge.”
He describes how initially he stood frozen to the spot; the woman in front of him badly hurt. He removed his jacket offering it to her as a pillow, while others tried to help.
Lockdown descends upon this central part of London as police hurriedly tape off the maze of connecting streets.
Those who work close by are told to return to their buildings or leave the area; throngs of vacationers are ushered back by officers donning fluorescent yellow jackets. Despite the sun, it’s still a cold March day.
Outside Westminster Abbey — the iconic Gothic cathedral normally a gathering point for celebrations like William and Kate’s glamorous royal wedding in 2011 — is Craig Meichan. A 20-year-old student from the town of Ormskirk, near Liverpool, he stands with four friends, his phone in hand.
Meichan, along with 15 others, has just left the Houses of Parliament, a stop on his college trip’s itinerary. Now he’s searching for his missing friends.
“[It] sounded like a car backfiring,” he says of the bloody end to the attack. “Police began shouting and they started cordoning off the area.”
As he speaks, the words seem to tumble out of his mouth. 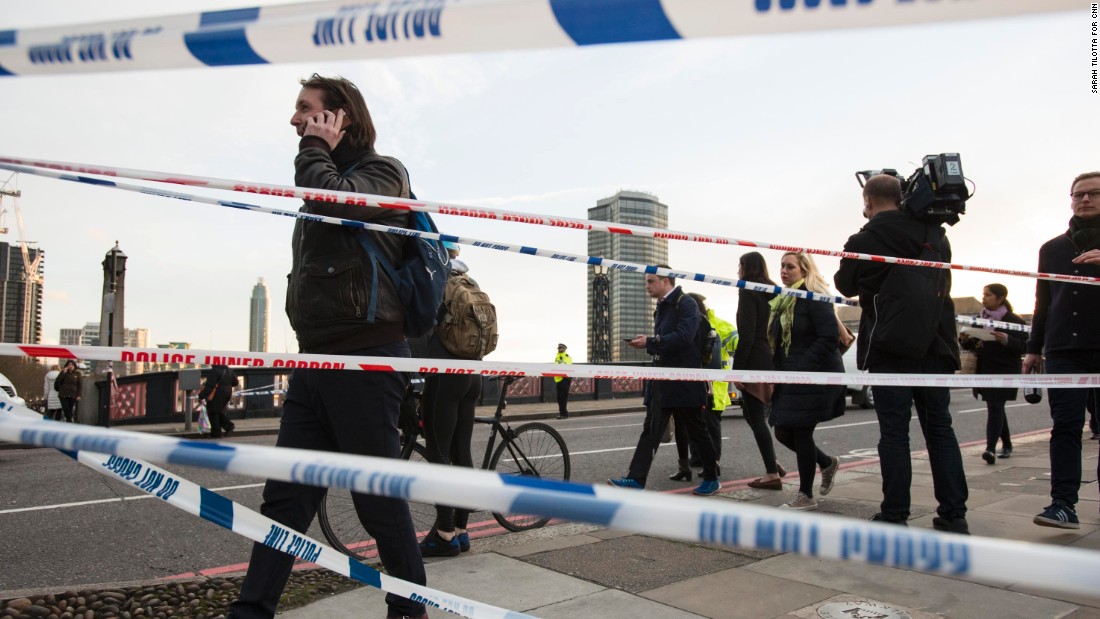 When the yelling and sirens filled the air, Meichan says his group was separated into three. He didn’t know where his tutor was; he hopes she has been locked inside the building. He says he’s worried some of his friends have gone toward the bridge to take photos.
“I’m a bit shaken up, you never expect this to happen to you,” he explains, his hands trembling.
Meanwhile, curious bystanders have gathered next to the police tape, their phones thrust into the air to document the empty square ahead. Two helicopters hover above Westminster bridge, a third circles the wider area. Sirens continue in the distance. 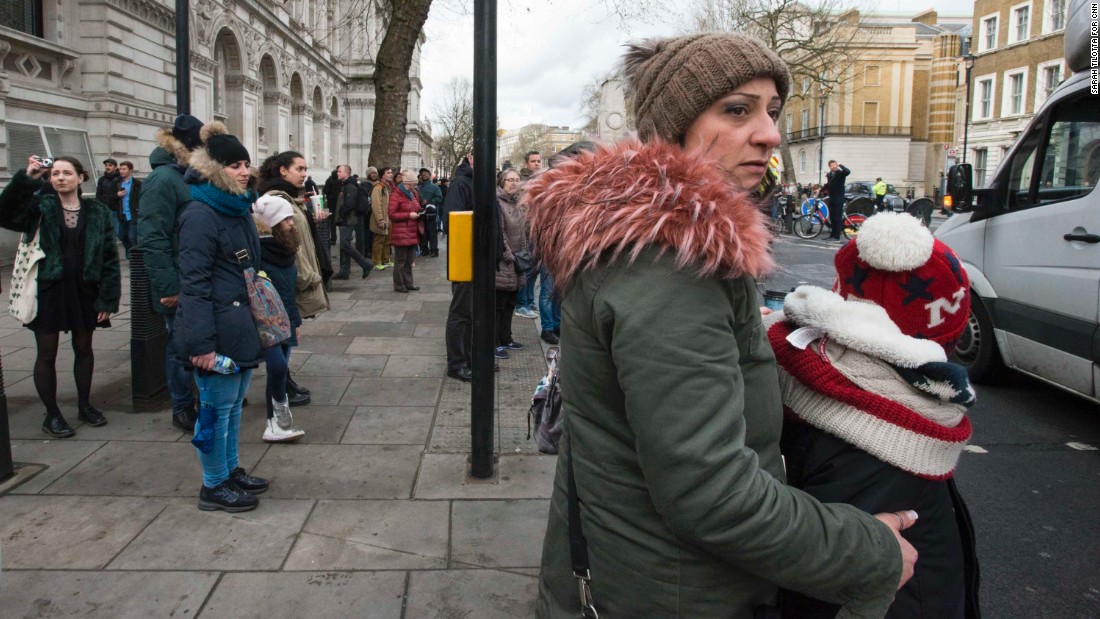 Flocks of people are leaving work early. Students from the exclusive Westminster School a few blocks away, easily identifiable by their uniforms, are strolling along and watching the crowds with interest. Outside pubs, some workers gather rather than joining the melee of wandering commuters. And there’s only one topic of conversation.
With red and blue tape blocking off every road in the immediate vicinity, commuters struggle to find an alternative route home. Many are on their phones typing text messages or checking in with calls to loved ones. Otherwise the streets are eerily silent. 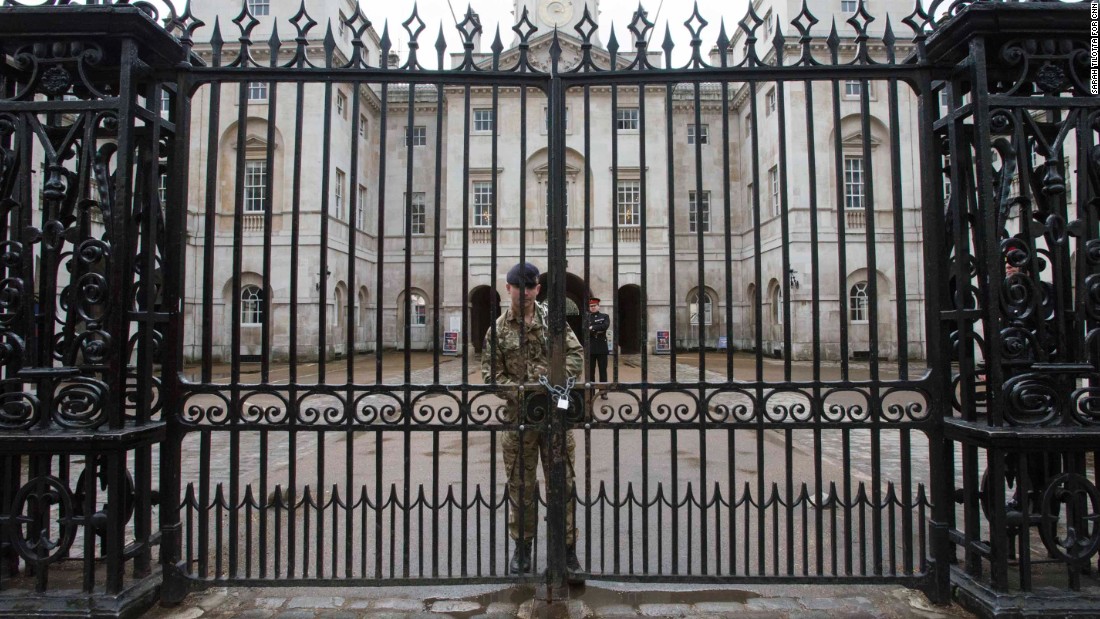 As dusk falls on London, we make our way across Lambeth Bridge at the other end of the Westminster area. It’s the only place nearby that we are able to cross the river to the south.
Police at the bridge say they are only allowing people to cross over but not return toward the city. Pedestrians must go around another way.
Emergency response vehicles continue to stream past every few minutes.
London Ambulance Service vehiclesare parked in a barrier across the south end of Westminster Bridge and in front of St. Thomas’ Hospital. Up ahead, blue flashing lights signal where people in white crime-scene bodysuits have come to examine the scene. 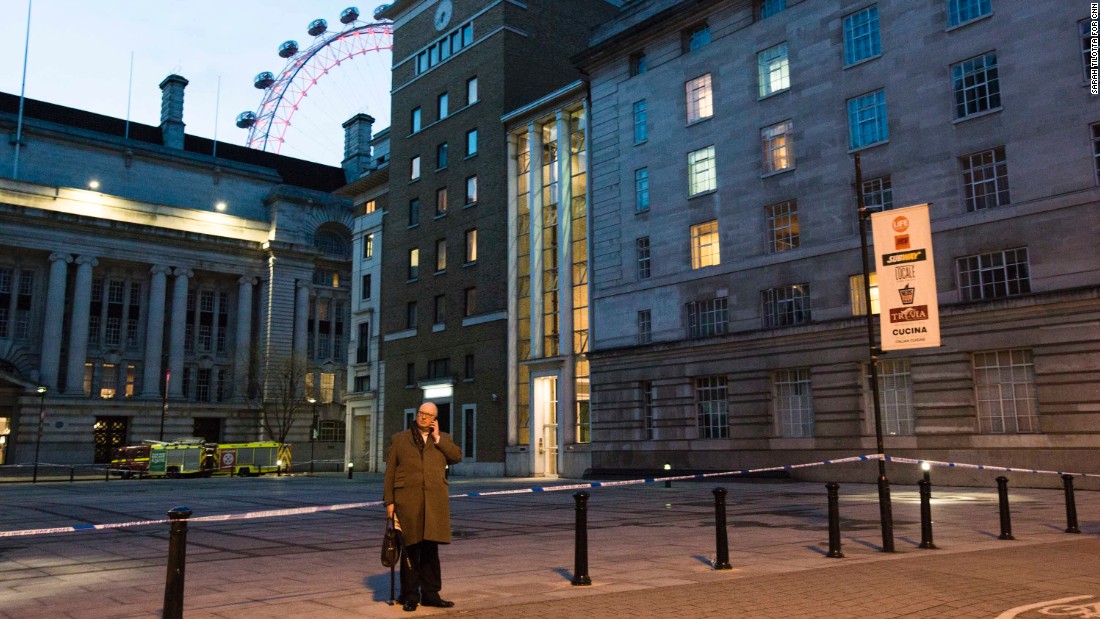 Details will continue to emerge over the coming hours and days. But already emotions are turning from shock to anger.
Rob Lyon’s first thought was to return home to Rugby — to his wife — but after hearing the incident was a likely terror attack, he defiantly says he’s going to remain in the city to continue the business trip he set out on.
“Initially I think I was shocked, quite emotional speaking to my wife about the near miss I had,” he says.
WATCH: How London attack unfolded
“I think I’m in an anger phase just because someone purposely drove a car at me.
“I’m sure there’s more shock to come further down the road.”