Americans love having the freedom of choice, and nowhere is that more obvious than in the fast food industry. It’s not enough that we can choose from hundreds of meals from hundreds of different restaurants. No, we had to invent “secret menu” items to give us even more options. But freedom is a double-edged sword, as I discovered when I tried to make my own secret items, and found that fast food employees will bring your sins to life if you ask them nicely enough.

We’ve all heard of liquid diets. I don’t know what witchcraft makes liquids healthier than solids, but I’m not about to question it. But consuming nothing but protein shakes and blended arugula must get tiring, and inevitably you’d be tempted to break your diet with a good old-fashioned cheeseburger. Well rejoice, health fanatics, because now you can enjoy your favorite fast food in a healthy liquid format! I present to you Saucy Buns: a triple order of Big Mac sauce, Parmesan peppercorn sauce, mayo, Sriracha mayo, sweet onion BBQ, creamy garlic sauce, mustard, and ketchup, all piled onto a nutritious sesame seed bun. 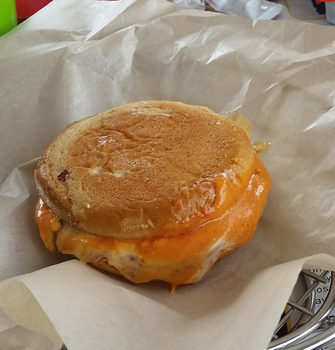 “There’s no button on the register for this, dude.”

I had anticipated confusion and resistance from employees who still ate old-fashioned solid food, and had prepared myself to fight for the meal I wanted. But nothing had prepared me for the cashier’s response of “Sure thing! I’ll make sure the cooks know.” Then she said, without a hint of judgement, “Sorry it’s a bit messy. We did our best to keep it neat.” What else have you seen? 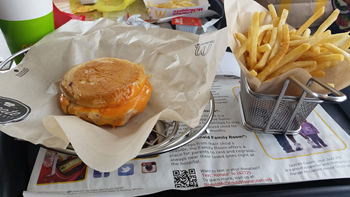 Everything looks classier in a wire bowl!

It had never occurred to me that their only response would be to apologize for not making it pretty enough. To the mystery burger craftsman who was roped into creating this oddity: I assure you that you did your best.

It looked like someone had taken every cheese known to man and melted them all into one glorious sandwich. This was the Schrodinger’s cat of burgers — it simultaneously looked delicious and revolting. But when I opened the burger, the superposition collapsed and revealed the true nature of the beast. 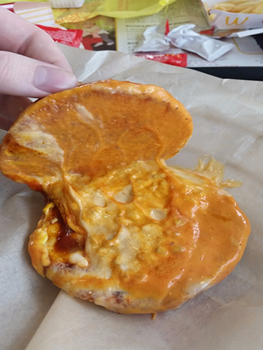 And as with the cat, I had no desire to eat it.

The first bite had the same effect on the restaurant as Fifty Shades Of Grey had on the country — excessive amounts of juice leaked everywhere, and it was extremely awkward for outside observers. The sheer number of flavors overloaded my taste buds, leaving me unsure of what I was actually eating. It just tasted like … taste. It was everything and nothing, the alpha and omega of burgers. 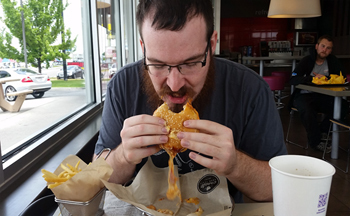 I’m probably not going to be the star of a whimsical McDonald’s commercials anytime soon.

The sauces slowly beat my taste buds into submission, and a clear vinegar base flavor emerged. Most of the sauces mixed together into an unidentifiable mess, but the lack of solids made the pickles in the tartar sauce stand out. Imagine taking a pickle, covering it in mayo and hot sauce, then having a friend chew it up and spit it into your mouth like a mother bird who hates her baby. 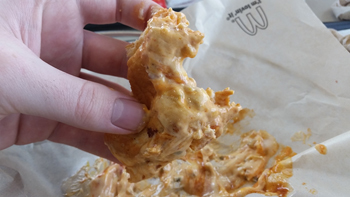 This may actually be Grimace’s semen.

I ate/drank the whole thing, but still can’t claim to understand the appeal of a liquid diet. I now know, however, that McDonald’s will help you commit a culinary war crime with a smile. But if you prefer a bit of texture to your meals, I would recommend …

It’s fun to be an early adopter, but it’s also getting harder and harder. Our world moves so fast that exciting new developments can form and die horribly in mere moments. The only way to jump on a bandwagon early is to arrive before the band. But it’s tough to tell what product will develop into a solid gold rocket-wagon carrying a band of John Williams and the “Gangnam Style” guy, and which ones will crash and leave you stranded alone in the wilderness with Dat Boi.

If you’ve experienced this disappointment, then I have exciting news! Using my extensive knowledge of the stock market, socioeconomics, and stoner munchies, I’ve deduced the next innovation in Taco Bell’s ever-shifting menu of fast food madness. The staff were upset that I had predicted their next meal, and were insistent that they couldn’t stuff a taco, nachos, and burrito into a quesadilla, citing small-minded concerns like “the tortilla isn’t large enough” and “it would be an affront to the very concept of civilization.” But I wasn’t about to let them stand in the way of progress, and eventually they relented. 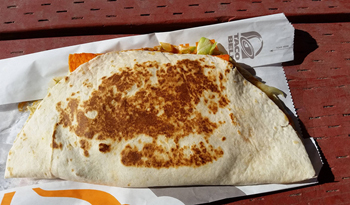 “Fine, I promise I won’t post anything about this on the internet.”

I was sworn to not reveal the identity of the Tac-Urr-Acho-Dilla’s creators, as they’re not normally supposed to make customers one of Lovecraft’s Tex-Mex-fueled fever dreams. But while Taco Bell HQ will never know their names, God always will. Assuming the innards of my food don’t disprove God’s existence. 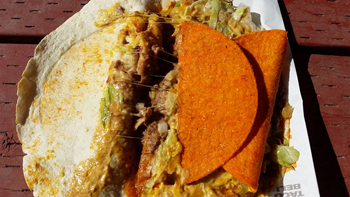 It looks like a burrito ate another burrito, and then vomited a third burrito out to be served. A bit of digging determined that there were nacho chips buried deep beneath a molten crust of bean and cheese, but they had absorbed so much grease that they were soggy beyond recognition. But the biggest obstacle to consumption was the sheer size of it. 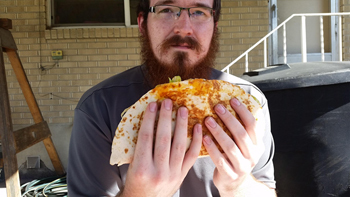 My “What Have I Done?” face is included for scale.

This wasn’t just a quesadilla — this was a newborn fucking baby. And just like a baby, it was leaking mysterious fluids and flopping around so much that I had to be careful to support all of its parts, lest it accidentally snap itself in half. Also like a baby, eating it made me feel guilty. It was like a taco, but … more. So much more. It was like all of Mexican culture was appropriated, gentrified, and mixed into one big Doritos-filled mess. Specifically, cultural appropriation has a salty-sweet vinegar taste, while gentrification is just incredibly cheesy. For those of you looking to maximize your experience, I recommend eating this while wearing a sombrero and watching old Speedy Gonzales cartoons. But if you’d rather eat something healthy instead of 8,000 percent of your recommended daily cheese intake, you might enjoy…

Most of us spend our mornings struggling to find enough clothes to be considered socially acceptable before stumbling out of the house in a bleary-eyed daze. But we all know that guy. The one who wakes up at 5:00 a.m., goes jogging, and tweets about how well the beautiful sunrise went with his kale smoothie, and all while you’re still trying to remember what soap is for. He’s always chipper, he’s always looking good, and he’s always the worst.

Well, now you can be that guy, with your very own efficient breakfast smoothie. This coffee, bacon, egg, sausage, and cheese protein shake will give you the boost you need to start your day, and provide enough protein to help you get some sick gains, bro. 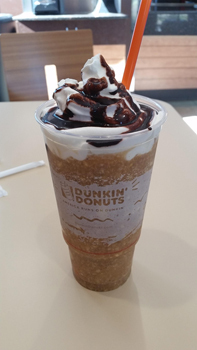 Stick it in a Nalgene for maximum efficiency.

The Dunkin’ Donuts’ barista was suspiciously excited to create this. I didn’t even order the whipped cream and chocolate drizzle — he added it on his own, claiming that it should look “fancy.” It was a good decision, because it made the drink look somewhat normal, until I went in for an unsettling closer look. If I found liquid like this in, say, a Chinese restaurant, I would probably be on board with eating it. Finding it at the bottom of a coffee cup is a very different matter. 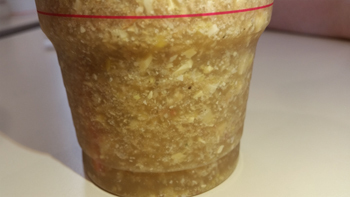 By which I mean it’s not really matter at all.

Your average smoothie is thick but, well, smooth. But stirring this felt like I was digging through wet cement. Large chunks of meat, while not visible through the murky depths of the beverage, were clearly waiting beneath the surface. I tried to break them up, but only succeeded in clogging the straw. 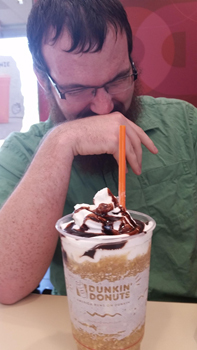 Just like mom used to make. (My mom hates me).

Drinking this drew an audience of employees who wanted to play “Gawk at the bozo torturing himself for the brief approval of the internet.” They enjoyed the drink significantly, which is good, because it means someone did. I didn’t want to drink it, and the liquid’s feeling was mutual. Like Chewbacca’s shower drain, the straw clogged frequently. What I did choke down felt like bubble tea, except the sweetness was replaced with bitter regrets, and the soft tapioca was replaced with frozen cheese and pig anus. If you want to recreate the experience for free, find a friend with a cold, stick a straw up their nose, and suck as hard as you can. Stop when you taste brain.