It’s often the details which really give a movie life. When we get the sense that there is a history and a logic to the world beyond what we’re seeing, we buy into it more. When an actor can feel the weight of a period costume, some part of them starts to believe in the world, and therefore so do we. At the same time, no amount of weighty frocks will save a movie from a bad script or poor sound design. Here are five movies that focused on the details but completely messed up on a fundamental level, rendering their painstaking work basically useless — like hand-embroidering a diaper.

John Carter is Disney’s film adaptation of Edgar Rice Burroughs’ A Princess Of Mars. In it, Confederate soldier John Carter accidentally astrally projects to Barsoom, a fictional version of Mars that’s full of adventure and opportunities for derring-do. Because he is from a planet with higher gravity, he has the jumping ability of a bionic gazelle. He’s also stronger than everyone else, but they make a really big deal about his jumping, with lines like “Jump for me!” and “Didn’t I tell you he could jump?!” They talk about jumping so much that one wonders if Burroughs was prepping us for a Reconstruction-Era Space Jam. John Carter uses his mighty jumping powers to escape imprisonment by a tribe of four-armed green men, save a Martian princess, and stop a warlord from taking over the planet.

John Carter employed linguists and dialect coaches from Avatar and Lord Of The Rings to create a fully functional Barsoomian language that matched up with the 420 words in the original 11 books. They diligently taught the language to the actors until they could communicate with one another in Barsoomian and began to influence one another to create a cohesive dialect for their tribe. They constructed a new language so that the Martian speech wouldn’t feel like filler gibberish.

I’m all for movies that go the extra mile to get the details right. (Did you know that the costume designer for Rome went to India to find materials to make 4,000 truly authentic-looking costumes? Neat!) I merely suggest that the “Let’s construct and learn an artificial language” phase of production should come after the “Let’s figure out why everyone’s obsessed with jumping, even though they have airships that fly on light” phase of production. People literally watch John Carter’s jumps agape from their flying airships. “Wow!” they seem to say, “it’s almost like he can do what we can, only with less control!” This contradiction really leaps out at the viewer in one of the first scenes where the male and female leads talk to one another:

Princess: “How did you learn to jump like that?”
Carter: “I don’t know. How can your ships fly?”
Princess: “Everyone knows how to make ships fly, you IDIOT!”

“You’re so lucky you have that six-pack and face to get by on.”

Now, maybe mocking John Carter for having inconsistencies is unfair, like poking fun at Michael Jordan for his batting average. To that I say, “Don’t play fucking baseball!” A director mistreating an inherently campy premise is how we wind up with Abraham Lincoln: Vampire Hunter instead of Shaolin Soccer. As a side note, my problems with this jumping plot have nothing to do with the fact that I have a vertical leap that makes me jealous of Benedict Cumberbatch.

#4. Popeye Built A Village In Malta

In 1980, Paramount set out to make a live-action movie musical adaptation of a popular cartoon that was sure to be a hit with kids. But when they lost a bidding war for the rights to make Annie, they decided to make Popeye instead.

The movie takes place in Sweethaven, a poor fishing village.

See that flag? I’m looking forward to the inevitable “Does Popeye take place in a post-apocalyptic Trump-run America?” article.

Director Robert Altman had a specific vision for the look of the town, and he wasn’t satisfied with dressing an existing location to match it or building sets on a sound stage. Instead, he hired 165 people to work for seven months to build him an entire village on the island of Malta. That meant access roads had to be built for the construction crew and a breakwater had to be built to protect the set from the changes in the tide.

Of course, if you’re going to go though all the trouble of building a village in the middle of nowhere for your movie, it’s not going to be just any village. It’s going to look exactly like what you envisioned, down to the timber used. They imported hundreds of logs and thousands of wooden planks from Norway, and all the roof shingles were brought in from Canada. Because if there’s one thing we know about Popeye, it’s that it should take place in a Mediterranean town built by Norwegians and roofed by Canadians: 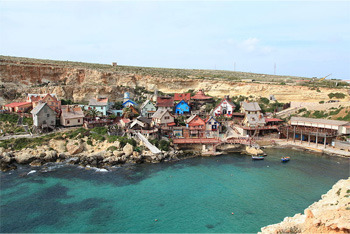 A lot of people like to shit on Popeye. It has a confusing plot, it’s hammy and sentimental, it’s slow, and Popeye hates spinach in it. The end product, though, is a dark yet heartwarming acid trip that feels like the movie Altman wanted to make. It might not be for everyone, but the things people complain about seem to be choices, not oversights. There is one aspect, however, that was as clear a mistake as leaving your read receipts on: Critics and audiences alike found the dialogue really hard to understand. It seems difficult to justify building a whole town (and the infrastructure to support it) when many of the main character’s lines are unintelligible to most viewers.

The clearest evidence that Altman couldn’t see the forest for the Norwegian timber is that the town still stands (and is a huge tourist destination), while the film itself has faded into obscurity.

Avatar takes place on a distant moon called Pandora that clearly must have been named by a real optimist. The movie centers on the planet’s neon-colored natives, called the Na’vi, who are surprisingly sexy, given that they have no genes in common with Elizabeth Banks. We watch human Jake Sully get to run around in a Na’vi body, have sex with sexy Na’vi, learn their culture, have sex with their horses, fight for their survival, and also have sex with their birds/dragons. 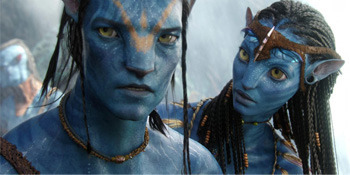 Despite the fact that the main character only fucks one plant in the whole film, the plant life of Pandora got a lot of attention from filmmakers. In fact, they hired Jodie Holt, a plant physiologist, as a consultant. She helped create the flora section of the Pandorapedia, which is like an encyclopedia, only even less welcome in the 21st Century. It contains taxonomic, ecologic, and ethnobotanic information for dozens of plant species on the planet. She used her considerable knowledge of plant evolution and adaptation to create a plausible story of how these plants came to be, given the environmental pressures of Pandora (presumably, Jake Sully fucking everything in sight is too recent a development to have impacted botanical development). 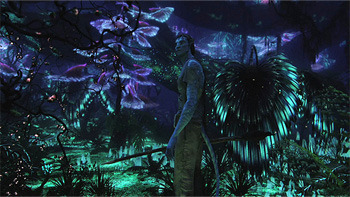 The sequels are just him raw-dogging the Tree of Souls.

Backstory is primarily helpful if it is allowed to influence what we see in some way. Avatar is rife with examples of the proverbial dog being wagged by the tail that is also a sex organ. The analyses and descriptions above were only used to justify existing designs, not to discover what would logically follow from the rules at work on Pandora.

So all of the work Holt did was just an exercise for whatever James Cameron thought would look cool. Ever notice that the trees are earth-green, while everything else is weirdly colored? That has nothing to do with photosynthesis. There was actually a big push by the design team to make them cyan (which would make the coloring of a lot of animals make more sense), but the special effects department wanted to give the planet a cyan atmospheric haze, which would have then been harder to see. By letting the aesthetics drive every decision in the film, they wound up with a bunch of sexy plants that would have made a better music video than a movie.