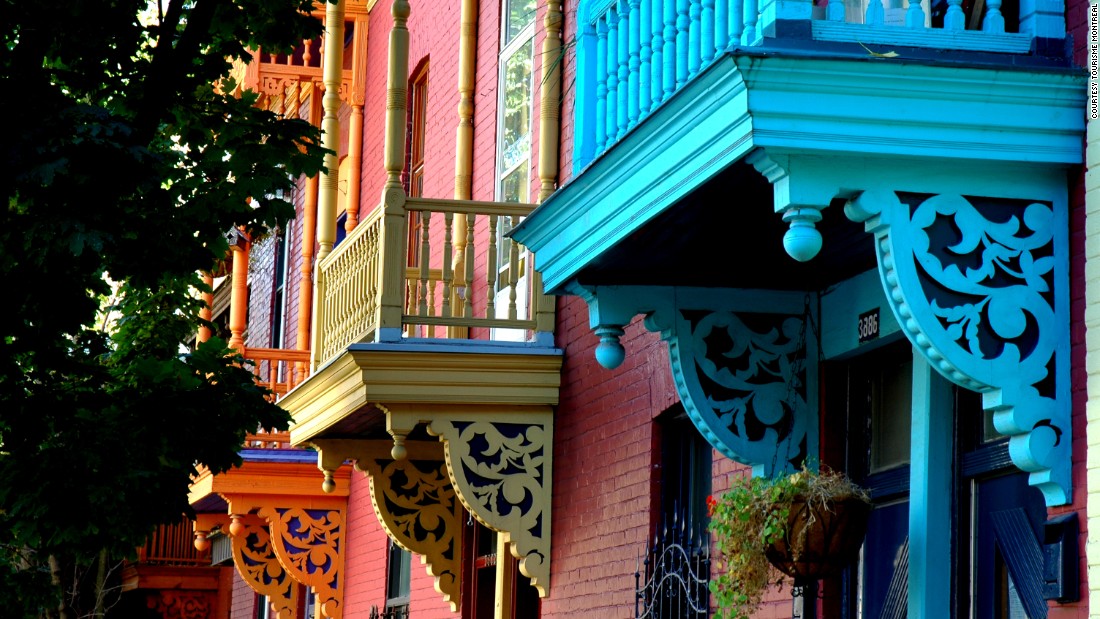 Montreal (CNN)Montreal is home to more than 200 ethnic groups that have all stitched their own patches into the urban quilt, and the city is full of distinct neighborhoods — some created hundreds of years ago and others born of the 21st century.

Many of them are hosting special events this year as the city celebrates its 375th birthday. But in any year, the city’s diverse districts provide visitors with much to explore.
“It’s definitely a city of boroughs and neighborhoods,” said Danny Pavlopoulos, who guides Montreal foodie tours for Spade & Palacio. “There are so many. And they’re so close together. And they’re all so different.”
To prove his point, Pavlopoulos took me on a tasting tour that included Salvadoran pupusas and horchata in La Petite-Patrie, gourmet cheeses, mushrooms and gelato in Little Italy and hipster coffee and craft beer joints in Mile-Ex — three dramatically different areas within a 20-minute walk of one another.
Even lifelong locals are amazed by the surprising variety one encounters while moving from one area of Montreal to another. “It is a pleasure to be able to calculate, to subdue, to rub shoulders with the mystery that was taking place in the neighborhoods, villages and alleys of Montreal,” wrote Monique LaRue in her award-winning 2009 novel “L’Oeil de Marquise.” And that continues to hold true.
“Just the other day, I was exploring a neighborhood I thought I knew well, and in turning a corner I ran into a Buddhist temple smack dab in the middle of Little Italy!” said Tyler Wood of the Montreal History Center.
“Montreal is special in that it has managed to preserve a great number of inner-city neighborhoods from the ravages of urban renewal,” Wood added. “Not to say the city hasn’t seen its share of expropriations, demolitions and car-centric projects. However, you can still find parts of town very much on the human scale. The street grid, reliable public transit and a growing number of bike paths make them easy to explore.”
Cycling is how I discovered half a dozen other neighborhoods, on a tour with Michel Thriault of Ca Roule Montreal that took us from Old Montreal to the Gay Village, through Le Plateau-Mont-Royal and the historic Jewish quarter before circling back to the St. Lawrence River waterfront.
On foot, by bike or via public transportation, the city is ripe for exploration. Here are a dozen neighborhoods to get you started: 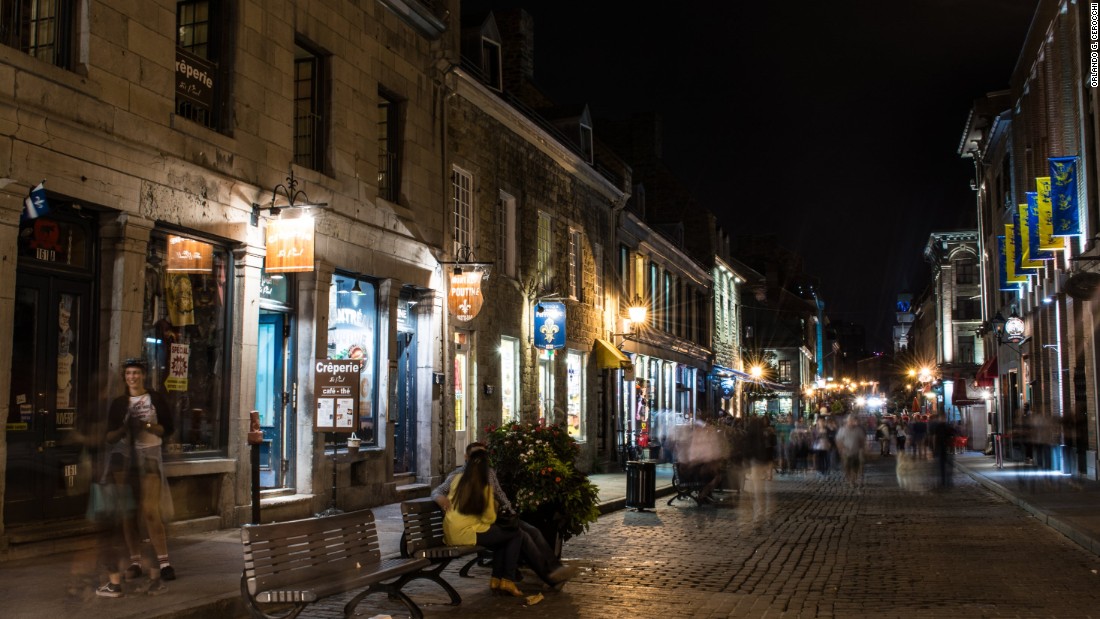 Today, the city’s oldest district, founded as a fur trading post in 1605 by Samuel de Champlain, is a mlange of shops, bars and sidewalk cafes that attracts visitors and locals in equal measure.
It’s also become the hip place to crash on a Montreal sojourn, with hotels like Le Petit Htel and the new Hotel William Gray creatively adapting old buildings into cool places to stay.
Thirty years ago, this wasn’t the case. Many of the Vieux-Montral structures were vacant, and most of the residents had fled to other areas, draining the neighborhood of life. But since listed historical buildings cannot be torn down, in recent years people began renovating them into modern business, entertainment and residential spaces.
Among the neighborhood landmarks are the Notre-Dame Basilica, the Pointe–Callire museum of history and archeology and the Old Port (Vieux-Port) where bygone docks, warehouses and grain silos have morphed into venues for summer swimming, winter ice skating, food festivals and IMAX films. 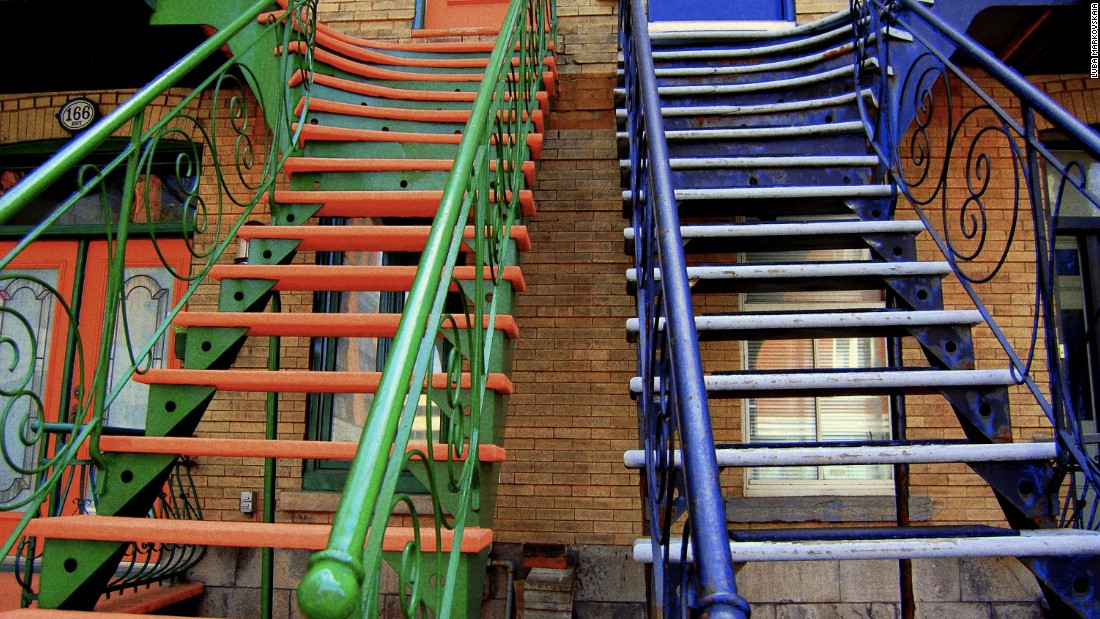 Life in the hip Plateau neighborhood revolves around the area’s bars and cafes and the leafy Parc la Fontaine, with its serpentine lakes and albino squirrels. The neighborhood flanks the north side of Mont Royal and McGill University.
Gentrification has transformed the Plateau into an artsy, upscale neighborhood where residents bike to work and school, “renaturalize” their alleyways with murals and gardens and restore the wrought iron stairs and colorful facades of their Victorian townhouses.
A sort of east coast version of Berkeley, the Plateau is also renowned for the militant attitude of its mayor and many residents, especially when it comes to motor vehicles. Copious bike lanes, expanded sidewalks and more park land have greatly reduced traffic in the neighborhood and created one of Canada’s most livable urban environments.
“Rents have doubled in recent years,” Thriault explained as we cruised down one of the Plateau’s many bike lanes. “But cafe life and the number of patisseries has increased. And you can get food from different regions of France. Finding an apartment in Le Plateau is much harder now, but your chance of finding a good croissant has greatly improved.”

Montreal’s creative cauldron, Mile End is home to artists and writers, musicians and filmmakers, as well as galleries, bookstores and entertainment venues packed into an area that barely covers one square mile.
Anchoring the neighborhood, the neo-baroque Thtre Rialto is a wonderfully restored 1920s moving-picture palace that now presents a year-round slate of cabaret, comedy, burlesque, dance, music and drama.
As Mile End moves up the food chain, many of the younger, edgier artists have migrated to adjacent Mile-Ex, a former industrial zone now filled with ateliers and hipster hangouts.
The world of sci-fi owes a debt of gratitude to Mile End, for this is the neighborhood that shaped the young Captain Kirk — it’s the place where William Shatner was born and raised.

Rather than having one distinct personality, this trendy neighborhood just north of Le Plateau cultivates two totally different vibes.
Chic shopping is the main event along the Rue Saint-Hubert, home to more than 400 boutiques, many of them one-off shops with unusual or offbeat items.
But the neighborhood also has a Latin flair, a delicious array of Hispanic eateries like the Salvadoran Resto Los Planes (their pupusas are to die for) or the Peruvian El Jibaro.

Simply called “The Village” by locals, this compact neighborhood sprawls along Rue Sainte-Catherine between the Plateau and the St. Lawrence River.
Once down and out, the area has morphed into a lively dining, drinking and entertainment hub where more than 80 bars and restaurants serve the city’s large LGBT community and anyone else looking for an alternative night out.
“Gay Village is a great example of Montreal’s neighborhoods continuing to evolve,” Thriault said. “A couple of decades ago, this was the city’s roughest area, the only place there was street crime. People shooting up, prostitutes on the street corners, people getting mugged.”
The gay residents who started moving in transformed the area, he said.
The area is synonymous with the Boules Roses — a canopy of pink balls by landscape architect Claude Cormier that hovers above a one-kilometer stretch of the Sainte-Catherine pedestrian zone.
The Village also hosts an annual summer event called Aires Libres that brings new, original and often startling public art to the neighborhood. 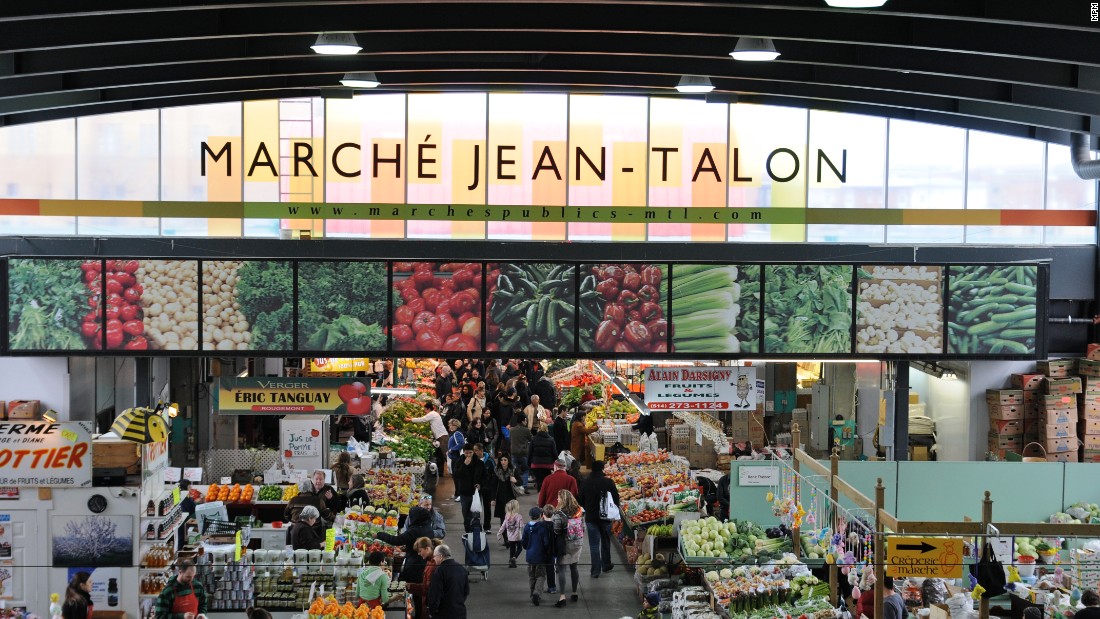 Italians have been in Montreal for nearly as long as the French, thanks to a 16th-century regiment recruited from northern Italy and sent to reinforce the king’s army in New France.
By the 1950s, the area around Jean-Talon Market was predominantly Italian and soon gained the moniker of Little Italy.
While the community revolves around the red brick Church of the Madonna della Difesa (a national historic site), visitors flock to the vibrant market to sample all sorts of gourmet foods and drinks.
Italian eateries also abound. But Little Italy’s most unique culinary attraction is arguably Southern fried chicken at Dinette Triple Crown, which offers fully-stocked baskets for those who want to picnic across the street in Parc de la Petite-Italie.

Although it was never a ghetto in the eastern European sense of the term, the area along Boulevard St. Laurent between McGill University and Mile End has long had a strong Jewish flavor.
The Museum of Jewish Montreal preserves the area’s heritage as well as the memory of celebrated residents like author Mordecai Richler, who set “The Apprenticeship of Duddy Kravitz” and other bestselling books in the neighborhood.
That heritage also endures in food — historic eateries like Schwartz’s Deli and top-notch bakeries like St. Viateur Bagel Shop where the real-life Richler (and the fictional Duddy Kravitz) dined.

One of the few neighborhoods named for the First Nations people who once lived there, Hochelega was the name of an Iroquoian village that Jacques Cartier visited in the 1530s on his first trip up the St. Lawrence River.
Now it’s renowned as the home of Montreal’s Olympic Stadium and of Parc Maisonneuve with its botanical garden, insectarium and planetarium.
But perhaps its most beloved institution is the sprawling, chaotic and aromatic March Maisonneuve, a public market lodged inside a historic early 20th-century stone pavilion. Dozens of stalls dispense Quebec fruits, vegetables, meats and fish, as well as artisanal cheeses and breads.

A microcosm of modern Montreal, Cte-des-Neiges harbors residents from more than a hundred different ethnic groups from just about every corner of the planet.
A brief stroll down the Chemin de la Cte-des-Neiges, the neighborhood’s main drag, reveals a wealth of ethnic eateries — Thai, Vietnamese, Chinese, Cambodian and Japanese, Middle Eastern, American, British, Italian, French and Haitian.
Hovering above the area is the massive St. Joseph’s Oratory, the largest church in Canada. Cte-des-Neiges is also a gateway to the warren of trails that meander through the thick woods and cemeteries on the north side of Mont Royal.

Located near the Lachine Canal on the south side of downtown, Little Burgundy is one of Canada’s most celebrated black neighborhoods, as well as the cradle of Canadian jazz.
Although gentrification has changed the demographics of the district in recent years, the population was originally comprised of a blend of Caribbean immigrants and black people drawn from other parts of Canada by railway jobs, including the descendants of former slaves who escaped from the United States into Canada via the Underground Railroad.
Rockhead’s Paradise jazz club is long gone. But other Little Burgundy landmarks are still going strong, like Atwater Market and Union United Church, the nation’s oldest black congregation.
Rue Notre-Dame, the main drag through Little Burgundy, has become a haven for trendy little cafes and antique shops.

Some might dispute that islands in the St. Lawrence River and an adjacent finger-shaped peninsula are actually neighborhoods, since they aren’t typical business or residential areas. But people do live there, in the famed Habitat 67 housing complex designed by architect Moshe Safdie for the Expo 67 world’s fair.
This urban archipelago is made up of two main islands: le Sainte-Hlne, a natural island that French explorer Samuel de Champlain named after his wife, and le Notre-Dame, an artificial island created in the 1960s from all the dirt and rock excavated during the creation of the Montreal Metro.
Both were obscure and under-utilized until Expo 67, when 50 million visitors passed through the islands. Many of the futuristic fair buildings were later adapted for other uses: the former US Pavilion is now the Biosphere environmental museum, while the French and Quebecois pavilions became the Montreal Casino.
FYI: The average purchase price of a Habitat 67 “cube” unit is around C $600,000. 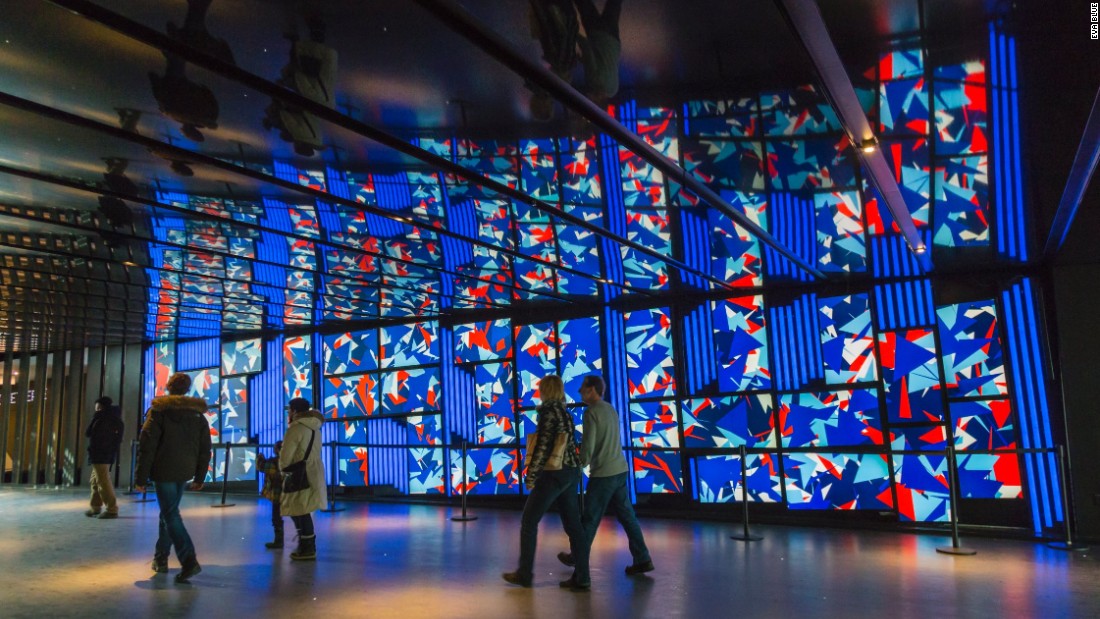 As the name suggests, “spectacles” of one sort or another are the raison d’tre of this flashy district between the Old Town and McGill University.
Though the district was conceived in the early 2000s as part of a concerted effort to boost Montreal’s cultural life, it’s now a bona fide inner city neighborhood that draws locals and visitors alike.
The quarter revolves around the Place des Arts cultural complex, home to the Montreal Opera and Symphony Orchestra as well as the Grands Ballets Canadiens. It’s also home to the Montreal Jazz Festival and Just For Laughs comedy fest.
Among its many other cultural institutions are Montreal’s central library, the Museum of Contemporary Art, the National Theatre School of Canada, the historic Club Soda music club and the Cinmathque Qubcoise.